In the Footsteps of Fred

Very little physical evidence in Campbelltown, if anything, is left to reminder us of the brief life of Frederick Fisher. All traces of the house where he lived, a storeroom and brick building he built, his farm and the fence (or possibly bridge) where his ghost appeared have all disappeared. Even the location of his grave has been lost to history.

Records associated with the court case surrounding the murder of Fred Fisher give us some idea of where these sites were. There are also articles written about the appearance of the ghost in the years following the reported sighting. One such early article was written in 1836, only ten years after the murder. Although not entirely accurate (it refers to John Hurley as the man who claims to have seen the ghost of Fisher and not John Farley), it does offer us with some food for thought, especially considering it was written so soon after the murder and ghost appearance.

The article appeared in Tegg's Monthly Magazine. This publication was only in existence for a few months during 1836. The Tegg brothers were booksellers and publishers in London and came to Australia in 1834. There are some descriptions in Tegg's article that gives us clues about some of the Fisher sites. The article described how Hurley (Farley) passed Fisher's house 500-800 yards when he claimed to have seen the apparition of Fisher. Fisher's house was on the site of the old Bank of New South Wales. This bank, demolished around the late 1950s, was in Queen Street and a few buildings to the north of Dumaresq Street. It was located about where today's Romanoff Clothing Store is at 215 Queen Street. Therefore the location of the ghost sighting, according to Tegg's article, would be about 457-731 meters south of this location along Queen Street. It was on the western side of the street, the same side as his house. If this is accurate, it would mean the location is further south of one of the main candidates for the appearance of Fred Fisher's ghost- the old water course at the corner of Queen and Dumaresq Streets. Many people believe it was a bridge that Fred appeared on however, the first mention of a bridge didn't surface until 1859 when a John Lang wrote about the story. This was 33 years after the event. 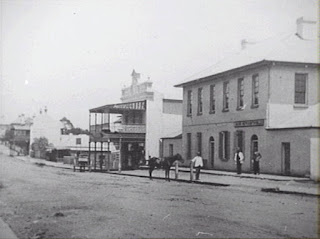 The Bank of New South Wales is the building to the right in this photograph. It stood on the site of Fisher's house. The photo was taken in 1893.


Tegg's article also gives a description of a building behind Fisher's house that was built by him: "The visitant to Campbelltown must have observed as he strolled through the village, a large unfurnished brick building, fast mouldering to decay, which seems to have been intended at the time of its erection for a store". Incredibly, this brick building was still in existence in the 1960s. There was also a stone storeroom behind it. Most of this building was demolished in the 1940s. 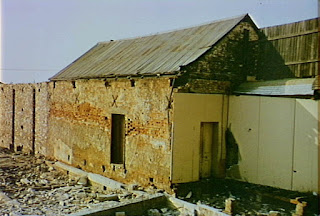 Thomas Davies Mutch, a politician and historian in the first half of the 1900s, also provides opinions on where Fisher's sites were located, based on his research. Mutch pinpointed the site of the murder and the blood-stained rails from a contemporary sketch plan. The ghost, therefore, sits on the southern boundary of Fisher's farm, 55 rods westward from Queen Street. The southern boundary of Fisher's farm was in line with the southern side of Allman Street. Therefore, according to Mutch, the site would be about 276 metres (55 rods) west of Queen Street and directly in line with Allman Street.

The location of where George Worrall buried Fisher was researched by historian Verlie Fowler in about 1980. Using maps and descriptions from Worrall's trial, she was able to locate the sight. It is now where the railway line passes over the dry creek. (see photo below). 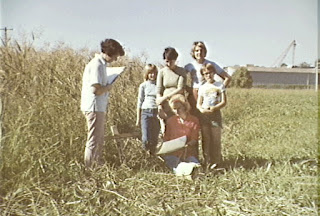 The mystery of exactly where Fred Fisher was re-buried in St Peters Cemetery is, and always will be, a mystery. Theories have always been thrown around, but the truth is that we will never know the precise location.

Fisher's Ghost: A Legend of Campbelltown
In Tegg's Monthly Magazine
March 1836
Posted by Andrew Allen at 16:41