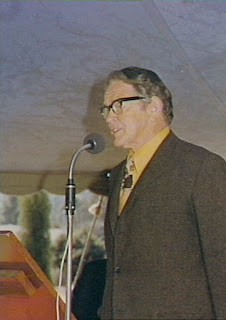 It's State election time, so I thought I would look back at the life of a former New South Wales politician that served Campbelltown. I chose Heathcote Clifford (Cliff) Mallam. Cliff was the Member for Campbelltown from 1971 to 1981.

A search of the material related to Cliff Mallam in our archives left me staggered at the amount of work he got through during his three terms. His face became so well recognized by local people, due to the fact that he was featured in the local newspaper almost every week. I thought I could discuss some of his achievements, but it was difficult to know where to start as there were so many.

Cliff was born at Backwater near Glen Innes and was the son of a farmer. He worked on dairy farms after leaving school at a young age, before moving on to be a shearer and drover. On moving to the city, he became a taxi and bus driver. He was a long term member of the Transport Workers Union and joined the labor Party in 1926.

Former NSW Premier Jack Lang played an important part in Cliff's life. Between 1946 and 1976 he was an editorial assistant on Lang's paper, The Century. It was Jack Lang that made the decision for Cliff that he was to serve Campbelltown in 1971. On his retirement Cliff told the local media "I was reluctant to come here- but Jack Lang said 'go to Campbelltown where the Labor Party was formed'". Cliff told the story about how Lang and Henry Lawson would sit on the hill overlooking Campbelltown and sit there and discuss politics. This was in the days before he became New South Wales Premier in 1927. He would escape the bear pit of Parliament, boil a billy, and sit down with Henry Lawson for hours on the hill discussing politics. This hill is now the park on the corner of Macquarie Avenue and Broughton Streets.

The move to the seat of Campbelltown was far removed from his previous seat of Cook in Sydney's south. In 1971 he defeated the sitting Liberal member Max Dunbier. He retained the seat for the next three elections and retired in 1981.

As I previously discussed, Cliff had a reputation as a hard worker for Campbelltown. There are too many to list but one topic that kept coming up was his work to improve Appin Road. He was active in having the road improved, speed limits reduced and alternative roads re-opened, such as an old army road to Bulli, to ease the congestion on Appin Road.

Cliff said he was privileged to serve Campbelltown. "I hope you will remember me as one who gave good judgement" he said.  Barbara Fetterplace, wife of former mayor Gordon Fetterplace and good friend of Cliff and his wife Alice, said of Cliff "...he was a true blue Campbelltown man, he would do anything for Campbelltown, that's my take on him". She continued "he always made a fuss of my kids, well our youngest was a baby, and he'd always make a beeline for her if I had her with me, and Gordon said to me sometime later, what do you make of Cliff Mallam, and I said, well I know politicians often make a point of talking to babies and being seen holding babies, but Cliff has kept doing it, so I think he might be for real!".