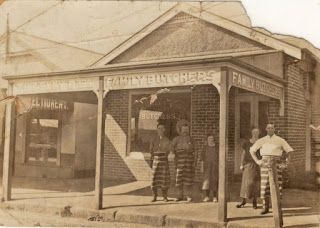 L to R Unknown, Unknown, Phyllis Cracknell, Grace Tildsley, Reginald Tildsley. Photo is undated. (Roslyn Tildsley Collection)
Campbelltown Library was recently fortunate to be given a copy of the this gem of a photograph by Roslyn Tildsley. The photograph shows Tildsley's Family Butchers with Reg Tildsley and his wife Grace with Phyllis Cracknell. The other two men on the left are unidentified but could possibly be Bill Coogan and Charles Jones, who were known to have worked there.
The shop was located opposite the old post office in Queen Street. The brothers Reginald and Horace moved there in 1922. An advert in the Campbelltown News that same year refers to them as the new butchers opposite the Post Office. The family had a butchery in Camden as well as Campbelltown. In 1923, the year after they moved into the Campbelltown shop, one of their huge wagons carrying carcases was 'smashed to match wood' on the Campbelltown-Camden railway on the night of June 12. Thomas Tildsley, a brother of Reg and Horace, was driving towards Narellan and at the crossing at Curran's Hill he was overtaken by the 5.15pm train from Sydney. The engine struck the back of the vehicle and smashed it into a thousand pieces. It was described as a miracle that Thomas survived.
The family overcame the set back and remained at Campbelltown until late 1937, when New Brothers secured the business. The butcher's shop no longer stands. Reg lived a long life and in his eighties was still trying to have an input into the Camden business. Although long retired, he would creep into the shop and start making sausages!
Sources:
HOLM, Marie et al 1985
Campbelltown 1930-1940 Dumaresq Street and Environs
Brisbane Courier, 13 June 1923, p13
Camden News, 16 December 1937, p5
Leila Spearing Interview 26 April 1978, held at Campbelltown Library
Posted by Andrew Allen at 14:14