Fun in the Mud 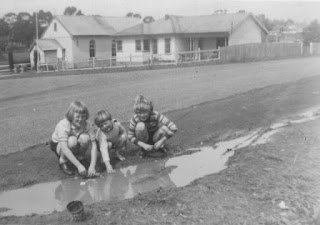 So much has changed since this photo was taken in about 1955. Pictured having great fun playing in the puddle are Marilyn Thorburn, Gillian Walker (now Blackstone) and Diana Thorburn. The location is Allman Street, Campbelltown, close to where it intersected with Oxley Street. Oxley Street has now become Moore-Oxley Bypass. In the background is a house and to its left is the former Wesleyan Chapel, built in 1845-46, and now the Uniting Church. Both these buildings still exist on the site.

The photograph was lent to the library by Gillian Blackstone, formerly Walker. Gillian was the daughter of former alderman and dairy farmer Arch Walker. The Walker family lived for a time at a house called 'Malua', previously located near the corner of Allman and Oxley Streets. It was demolished in the mid-1970s to make way for the new bypass. The children, including Gillian in the centre, would be playing out the front or very near the front of 'Malua'.

Although both buildings still stand today, much has changed. The house is now hidden by a number of trees and shrubs and Allman Street is, of course, now kerbed and guttered. The main change though, is the endless rush of traffic tearing along the bypass.

Wish we could go back to these simpler and more innocent ways of life sometimes!

Thanks to Gillian for this and the other fabulous photographs lent to the library.

Below is a shot of the sun rising at exactly the same spot today. 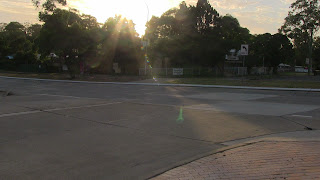