With the sad news this week of fire destroying much of the iconic General Gordon Hotel at Sydenham, I was thinking about buildings in Campbelltown destroyed by fire over the years. While most buildings that have vanished fell victim to the bulldozer, a small percentage were burnt down. I've researched four such buildings.

This impressive two story building was built in 1847. It was described as a "beautiful old English Parsonage". It was closed as a rectory in 1882 upon the retirement of the Rev. George Napoleon Woodd, who had been the incumbent for 26 years. The building then became Miss Gordon's Boarding School for Girls. The school later closed and the building was leased out.

Severe bushfires broke out in early September 1895 as a result of hot and dry winds. On Saturday, 7 September the occupant of the parsonage decided to bake scones. The wooden shingles of the roof caught alight and in the hot, dry conditions the fire could not be extinguished and the parsonage was gutted. 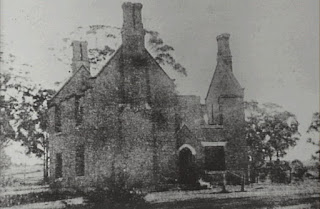 Denham Court Rectory after it was gutted by fire in 1895 (Denham Court Collection, Campbelltown City Library)

At 11pm on the Thursday night of 9 July 1981, Campbelltown Fire Brigade was called to a fire on Appin Road. This was the empty and derelict house known as "Glen Lorne" that dated back to 1823. The timber house had been empty for fifteen years and was owned by Lady Dorothy Macarthur-Onslow. It was built on land granted to George Woodhouse in 1823. It was purchased by an architect named G A Mansfield in 1876 and then followed a succession of owners. The house was long admired by Campbelltown residents and a landmark on Appin Road for many years. No official cause was given for the fire, although vandals were suspected. 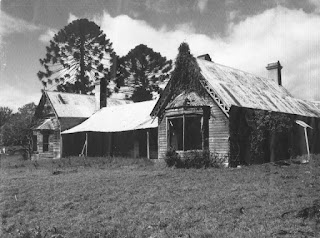 What was it about fire-destroyed houses that started with Glen! Glen Alpine was the home of Campbelltown's first clergyman Rev. Thomas Reddall and dated back to the 1820s. Glen Alpine House was built on land south of Campbelltown in today's suburb of the same name. It was a brick and stone house, probably single storey, with a verandah and French doors opening to the garden.

After Rev. Reddall's death in 1838, three of his daughters lived in the house until the last daughter Amelia died in 1900. The house and surrounding 375 acres of land was sold in 1902 to James Sheil.

According to local tradition, the house was burnt down around the turn of the century. Local severe grass fires in 1902-1904 were thought to have been the culprit.

The site today is in Heritage Park, a reserve in Glen Alpine suburb. 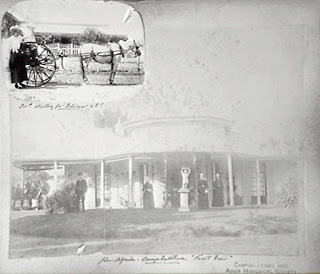 Members of the Reddall family standing in front of Glen Alpine; with an inset photograph of two unidentified people beside a horsedrawn buggy (Campbelltown and Airds Historical Society)

The Hope Inn stood opposite the Court House in what is today's Mawson Park. A licence for the inn was granted to Isaac Rudd in 1841. William Rixon had the licence in 1847 and to William Phipps in 1850. The inn burnt down in 1854.

In 1898 The Cumberland Mercury ran an article about Campbelltown. A line from the article reads "old hands say that the stocks, which were part of the punishment inflicted upon the drunken and incorrigible, were erected on the reserve near the old "Hope Inn"."