I recently came across an unusual story that I was unaware of. In the winter of 1901 a local family suffered a traumatic experience at their home on the Glenlee Estate near Menangle. The family was terrorized by rock throwing that lasted for at least three months. The disturbance appears to have stopped as suddenly as it started.

James Carroll, a respectable and well-to-do dairy farmer, was overnight the focus of media attention. His family first noticed rocks being hurled at their farmhouse in May 1901. These missiles were hurled from the foot of the steep knobby hill next to their home. All attempts to identify the culprits failed, despite large groups of police and civilians camping out each day and night to catch them in the act. What puzzled everybody was that James and his family had no enemies or any cause to attract them. He was popular with all who knew him.

The house was attacked mostly at night, often in the small hours and almost always from the adjacent hill. The rocks landed on the iron roof but occasionally on other areas of the house and sometimes striking members of the family. The matter was reported to the police after a week. The missiles still continued, even after the police kept guard. Large search parties were formed to scour the surrounding land for miles around but nobody was ever found. The Evening News reported that "For weeks men formed a cordon along the hill, six at a time, and watched in relief of four hours each, crouching in the frost behind bushes and stumps, but without result." The newspaper went on to describe how "One evening one of the employees, going outside, sang out, as a challenge, "Give us a stone now!" Swift and sharp came the reply, as a stone struck the wall of the house beside him with a loud knock".

Damage to the place included broken windows, a hole knocked in a corrugated iron tank and roof damage. A state schoolgirl named May Ryan, living at the house, had her temple cut open as she was carrying wood. As soon as stones were heard crashing into the house, police and family members would rush out to find and hear nothing but "the moaning of the wind in the trees".

On one or two occasions unidentified people were seen on the hill. Each time they disappeared as soon as they were persued.

James Carroll later believed that someone was determined to remove him from his property. He told media outlets that he suspected why but this was never published. James was quoted as saying "They can make it as hot as they like, and I'll stand my ground all right with them, until they get tired".

The reports in the media suddenly stopped after 16 August when they reported that it had been a week since the last incident. I could find nothing else in the library's records about this episode. James Carroll's property was called Hillside Farm and he later bought Sugarloaf at Menangle. He died in 1936.

I'm not sure if the house still exists but I'd like to find out more about this story. Perhaps one of our readers knows more or know descendants of the Carroll family. 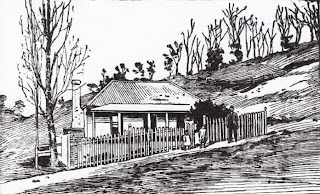 A sketch of the house in the Evening News