Ferrets in the Vault

This wasn't the first time that Campbelltown folk had to deal with ghosts in their town. One night in early December 1929, unexplained lights were seen emanating from St Peters Anglican Cemetery. The newspapers reported that The light was first seen by a local baker, who informed his next-door neighbor. When they came out the front of the shop, however, the light had vanished, only to reappear a few minutes later, and to twinkle for a minute or two, and vanish again. It was thought that tramps had made their home in the cemetery, particularly as it was summer.


Observers could make out that the lights were coming from the vault of the Tyson family. The vault was well known to the population, as James Tyson was regarded as the country's first millionaire. The vault was on the southern side of the cemetery.


It didn't take too long before the mystery was solved. Two boys, one of them a Camden boy by the name of Jimmy Meredith, had come across to do some rabbit hunting, and had lost their ferrets. Some boys had told them they had seen them in the cemetery. This means it was probably a moonlit night, but how could they still know there were ferrets in the cemetery and what were these boys doing hanging around there anyway?

Showing great courage, the boys then braved the perils of the fallen-in vault and retrieved their ferrets. What I found remarkable was that this story was news for many newspapers around the country for this day. 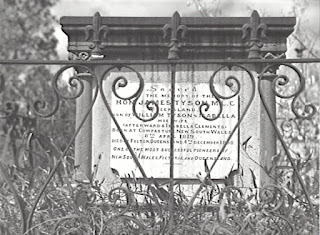