Whether you know it or not you have probably seen a sculpture by the artist Tom Bass. His works are not hidden away in art galleries but forever on public display outside company buildings, universities, hospitals, churches, wineries, parks and other open spaces across Australia and overseas. John Macdonald called his sculptures “part of the fabric of the city.” Much of that cloth was cut from the very earth of Minto.

Born in Lithgow in 1916 Tom’s father was an unsettled man. Constantly moving, the family ended up in the then slum of Erskineville. During the depression, Tom remembers they would shell almonds around the dinner table to earn money. Later employment included "shop boy" at the Mick Simmons store alongside fellow shop assistants Don Bradman and Stan McCabe who signed cricket bats to sell. He became a rouseabout, sandblaster, swaggie, golf course rubbish collector, pottery designer, mannequin maker and model to Norman Lindesay.

His local story, though, begins in 1937 when he met fashion artist Lenore Rays whose parents lived on a farm in Minto. During their romance, Tom would cycle from the Rocks at 5:00 a.m to arrive at Minto at 7:30, just after milking, for breakfast.
Tom found the sweeping countryside of Minto idyllic and the food heartening after experiencing a “hunger backlog” for much of his life.

After national service he married Lenore and they spent their honeymoon at the “Good Intent’ hotel which he always felt “seemed right”. With just five pounds, no job and living at Lenore’s parents’ the couple took a stroll one morning into the village of Minto where they met a man by his broken down car. Hearing that Tom was a painter, the stranger gave Tom a job. Walking a little further along Ben Lomond Road they discovered a vacant house for rent and so their two major problems were solved with one leisurely walk - though house painting wasn’t what Tom had had in mind! In 1948, with three children to look after, he graduated art school.

Tom’s life would, in so many ways, be shaped by pure happenstance. Needing a new chimney the Bass’ hired bricklayer  Jack Porter. Now ‘Old’ Jack was also a brick maker and knew the couple were artists. He asked if they’d ever worked with the local clay. They went outside and Jack pointed some out in the soil.

Tom’s passion for creation ignited and with a bucket of clay from a nearby hillside he fashioned a bowl which, though never fired, he kept the rest of his life.

During the 40’s through to the 60’s Bass won a myriad of commissions and worked to evolve a number of sculptural techniques at his Minto studio, first creating clay maquettes and then using “grass roots engineering” to deposit copper electrolytically for large scale sculptures when bronze casting was simply not available. Tom’s projects grew ever larger and when in 1953 he needed to cast a forty-foot high falconer for the Uni of NSW he rented half a barn from a neighbouring farmer.

The neighbour needed a dam and so Tom struck a deal – he used the farmer’s plough, scoop and horse and dug the dam for him in exchange for the clay he found there. Tom would use and re-use this clay for the rest of his working life.

In 1963 one sculpture, for shipping company P&O, courted controversy over its form. Recently opened by Prime Minister Robert Menzies it soon featured on the cover of Oz magazine. Tom Bass’ P&O wall fountain was described as an attractive urinal with a continual flushing system with basins set conveniently at different heights. Nor did you immediately have to spend a penny to use it, you could P & O! 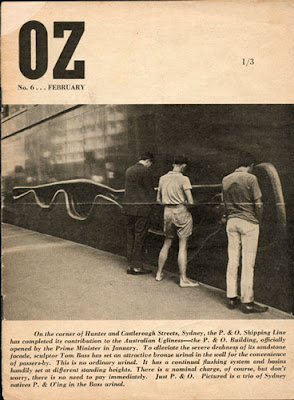 
Editor Richard Neville and his colleagues were charged with obscenity and put on trial. Tom Bass was called – for the defence and had pleasure in commenting that he thought it witty and a “fair comment.”

In 1967 Tom embarked on a major work over two metres high, twenty-one metres long and comprising three tonnes of copper the giant lintel would hang over the doors of the National Library of Australia in Canberra. 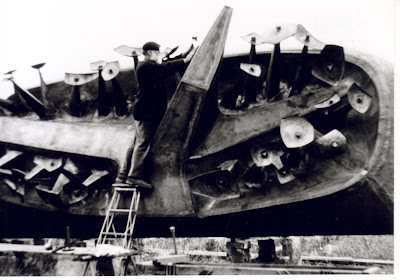 Tom works to complete the fittings on the underside of a lintel sculpture. c1967.
Jones Collection (Campbelltown City Library) 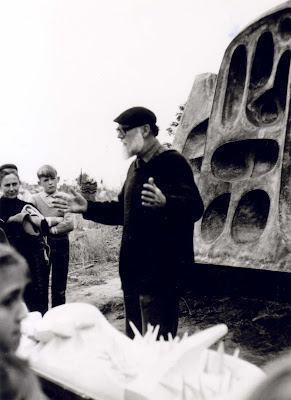 Tom talks to Minto Public School students about his sculpture in 1968 before it begins it's journey to Canberra.
Jones Collection (Campbelltown City Library) 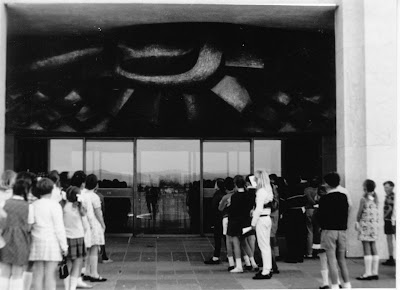 Minto Public School pupils on excursion to the nation's capital view the Tom Bass sculpture in situ above the entrance to our National Library.
Jones collection (Campbelltown City Library)

After being unable to teach the way he wanted at the National Art School Tom spent a year cleaning up a warehouse in Sydney and in 1974 began the Tom Bass Sculpture Studio School where he taught very late into his life. It still holds classes and the students still use the clay he dug from Minto all those years ago.

Tom wrote that the hard times of his life were “parts of my process of learning” and seemed even grateful for them on reflection. Tom died in 2010 aged 93 having said, ‘we will sleep well knowing we are all used up’ 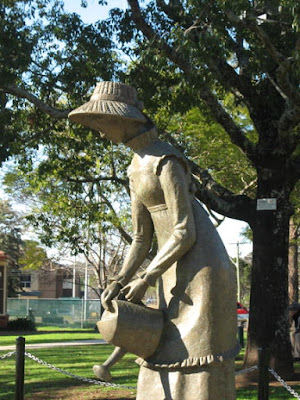 Elizabeth Macquarie Memorial, Mawson Park, his last major work inspired by his keen love of history.
Officially unveiled in August 2006 when Tom  was 90 years of age.