Almost everyone in Campbelltown would be familiar with the story of Fisher's Ghost. Not many however would be familiar with "The Harrow"- the pub where John Farley ran to 'in great fright' to break the news of his ghostly tale. The Harrow therefore played an important part in Campbelltown's history. This is why I was fascinated by a discovery I made on Trove last week of an article from the Australasian Chronicle in 1841, just 15 years after the Fisher's Ghost legend was born. It appears that The Harrow became well known for other ghostly experiences other than those related to Fisher.

The Chronicle describes a letter written to the editor about "great alarm and sensation" in the village arising from strange experiences in the old pub.The letter explains that "...some unusual noises were heard, at unreasonable hours, in an old house occupied by Messrs. Shields and Patrick, in which is conducted the butchering business. These parties have been obliged to leave the premises every night, in consequence of the rumbling noises heard all over the building, and take shelter in adjoining houses." It went on to describe how a man named Baker had once lived there but had to vacate the premises because of the hauntings. The letter further stated that "I have often heard him say he could not get one night's rest in a week from the rattling and tumbling heard aloft when the serial beings were conducting their midnight orgies." I love the language.

The old Harrow actually survived for approximately another 118 years. It was built probably in 1822. Prominent businessman and ex-convict John Patrick owned the license shortly after the Fisher's Ghost experience. David Patrick researched the pub's history extensively and managed to pinpoint its exact location. He wrote an article in Grist Mills in November 1998 outlining his results. After John Patrick's ownership, the building would be used for various shops including a general store owned by the Graham Brothers in 1896, a fruit shop for G. Packer in 1915, C.W. Parker's Store in the 1920s and Romalis' Fish and Chip shop and café. It disappeared without trace after this. It is now the site of the Campbelltown City Centre in Queen Street, directly opposite Lithgow Street. 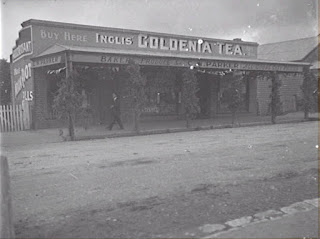