What exciting news it must have been for the people of Ingleburn when they found out they were getting a pool built in the George's River for them. This was pre World War Two and ahead of its time compared to other councils in Western Sydney. The pool proved to be very popular with Ingleburn families, with almost every child from then on recalling fond memories of the Ingleburn Weir as it was known.

The first reference to building the Ingleburn Weir is in the Ingleburn Council meeting of 10 November 1936 when it was resolved that "the clerk [HJ Daley] be authorized to obtain information and estimates for the construction of a weir across the George's River for the purpose of providing a swimming pool". A recommendation to proceed was adopted the following month. Council records indicate that the weir was constructed between 6 March 1939 and 22 January 1940. 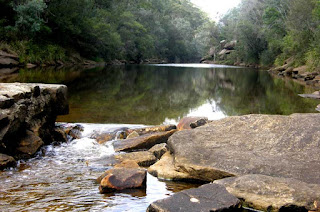 Above photograph: How Ingleburn Weir looks today
The weir was constructed by local Fred Goodsell. According to Arthur Hounslow "he was a builder of sorts and he lived locally and he was given the job." It is believed that stone for the weir was quarried in an area off Cumberland Road. Bert Wallace was the overseer.While Fred Goodsell was responsible for building it credit for organizing its construction is given to Harley Daley. Peter Benson explained that unemployed people were used to help with the building the weir. It became known by Ingleburn people as "Harley's Folly".
The weir became the recognized swimming hole in Ingleburn in the years after its construction. Scouts would regularly attend camps near the weir and it was used for swimming events. This remained the case for many years.
Campbelltown City Council have identified Ingleburn Weir as having local heritage significance. The weir has also been identified by the Department of Primary Industries (Fisheries) as a high priority site for remediation work to facilitate the passage of fish, which may impact on the heritage significance of the weir. Despite its heritage significance, the weir was in a dilapidated state until conservation works were undertaken in recent years.
Sources:
Ingleburn Weir Heritage Impact Statement, November 2007
Leishman, Alan J. July 1997
Ingleburn Weir: History and Status Discussion Paper
﻿
﻿
Posted by Andrew Allen at 15:57