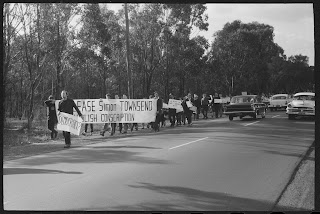 Most of the older readers of this blog would remember Simon Townsend, mostly famous for compering the children's television show from the 1980s called Simon Townsend's Wonder World. However some of you would be unaware that Simon was also famous in the 1960s for disobeying the call-up notice to join the Vietnam War. It was at Ingleburn Army Camp that he was incarcerated as punishment, causing friction in the community and resulting in a demonstration march at the camp that attracted a huge crowd.
In the mid 1960s whilst living at Woy Woy and working as a columnist for a community paper he became a conscientious objector against the Vietnam War. He gained national prominence on his anti-conscription stance, saying "I suddenly decided to be a ...objector to the Vietnam War. I then went to Sydney, I met people, I joined the groups and I read. And suddenly I had an intellectual basis for my objection to the Vietnam War. And that was when I got very busy, objecting, going to court, and I ended up in Long Bay Gaol for a month. And in 1968 I ended up in the army prison for a month. I was court-martialed while I was there. "
Simon was one of the first to go to gaol for acting contrary to the National Service Act 1964. According to local military historian Brian Battle, it was reported that Townsend commenced his confinement in the cells at Bardia Barracks. He was placed in solitary confinement for 48 hours, to be woken up every half hour. He was released on 14th June 1968.
As mentioned, Simon Townsend's confinement at Ingleburn caused quite a stir and a demonstration march was organized to show the community's disapproval. Photographs from the Tribune show large crowds demonstrating and plenty of passionate speeches in support of Simon. Interestingly, local media didn't bother to cover the occasion. 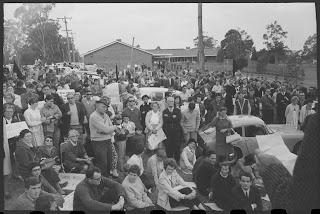