The Campbelltown to Camden train, affectionately known as 'Pansy', is remembered fondly by those who remember her. The train or tram service as it was known, played an important role in transporting people from both towns to their required destination. Its stations between Campbelltown and Camden included: Maryfields, Kenny Hill, Curran's Hill, Graham's Hill, Narellan and Elderslie. How valuable would it be today and in the future if the line was still functioning. From most accounts the service ran efficiently with the only occasional hiccup of the steep slope up Kenny Hill. Look a little further into the earlier history of the line however and a more troubled picture is revealed.

Incredibly, only week after its opening in March 1882 the train experienced its first accident. At about 5pm a train laden with people who had attended a land sale at Camden was approaching the main line at Campbelltown. The train on descending an incline smashed into a number of ballast wagons. Many were injured, including a Mrs Evans of Glebe who suffered the worst injuries.

Only a couple of months later on a dark night, the train was badly damaged after it ploughed into a large pile of logs, deliberately stacked against the line. The culprits or 'cowardly wretches' as the local paper described them, have always remained a mystery. Whether it was an angry farmer or drunken louts is unclear. The driver and passengers thought an animal had been runover. After the logs had been cleared and the train moved on a second obstruction was encountered. Another larger log was left on the tracks. Several passengers then chose to walk into Campbelltown rather than risk their lives further. 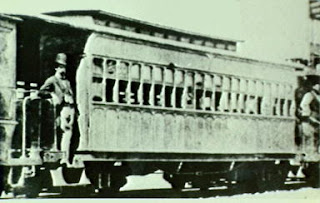 Accidents continued on the line in the ensuing years. In 1889 a valuable horse was killed on the line near Narellan and forced the engine to be thrown off the rails. A cow was killed by a tram a few evenings before that. In 1903 a gang of men employed on the line were returning one night from Narellan to Campbelltown on a trolly when it collided with a cow on the rails. The men were all thrown violently on to the metal and suffered serious injuries. The fate of the cow couldn't be ascertained!

In 1905 a man's foot had to be amputated after a serious accident. Mr Alfred Clissold was riding on the rear platform on the last carriage. The guard failed to pull the points and the carriage crashed into the buffer stop causing Alfred to lose the fore part of one foot. He was awarded 1000 pounds damages.Two years later the tram collided with a horse. A boy was riding his horse after a cow that had walked onto the line. He didn't hear the approaching train, which struck the horse and threw him on the roadway. The boy escaped with severe bruising however the horse had to be destroyed and a dog following the boy was unfortunately run over by the tram and decapitated. 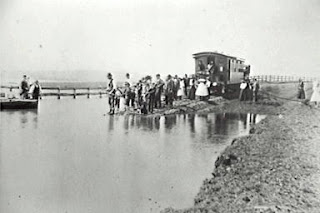 Further carnage occurred in 1914 when an engine collided with a number of carriages near Campbelltown station, causing injuries to two people. In 1919 the train crashed through a flock of sheep on the line. In 1956 a fatality occurred where the Hume Highway crossed the line at Narellan. A 20 Class engine was struck by a brand new truck. Tragically, the owners had invited two of their friends to accompany them when they picked up their new truck from Sydney. All four occupants of the truck lost their lives. No further dramas appear to have struck after this.

The line closed down in December 1962, with a special journey held on January 1, 1963- the last journey 'Pansy' would make.