One of the most prominent people in the early days of Campbelltown was Thomas Hammond. He was born on 15 July 1792 in Gawsworth, England. Thomas became a London brick maker who, at the age of nineteen, had been transported for seven years. He arrived in Sydney on the General Hewitt in 1814. He received a grant of 100 acres at Campbelltown when his sentence expired and he named this property Clari Montes.

The convict ship Genral Hewitt
In 1824 Hammond married Ann Byrne, the daughter of an Appin settler. The marriage produced eight children. The family worked hard at Clari Montes, planting grapevines, hops and fruit trees. His family reportedly lived in a 'commodious dwelling' with outhouses. As well as possessing a strong knowledge of farming, Hammond also put his skills in brickwork to advantage. He was granted land on the corner of Cordeaux and Queen Streets, where he built an inn which he named the Kings Arms. It consisted of 12 rooms, a kitchen and stables. He was also awarded a contract to convert Cooper's public house into a courthouse and gaol in November 1826. 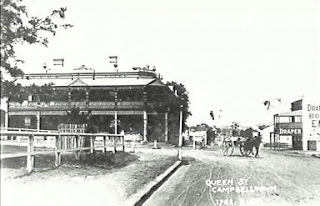 The Kings Arms Inn, photographed in 1886 when it was known as The Club Hotel
Thomas Hammond also played a significant role in the story of Fisher's Ghost. At George Worrall's trial, Hammond, who knew Fred Fisher, said of Worrall "In July he offered to sell me some boards of Fisher's, which he was authorized to dispose of by a written power, and would show it; but he never did. The boards must be taken away immediately, he added, for fear of an execution be put in, and that Fisher had left because he was afraid of a persecution for forgery." While talking to Worrall, Hammond noticed that he had a pair of trousers on which belonged to Fisher. Cross-examined, Hammond said: "Fisher was a much smaller man than the prisoner, and it was the tight fit of the trousers that lead me to notice them; also the cut- the prisoner being a country farmer."

Thomas Hammond also ran a boarding school known as the Campbelltown Academy or Clari Montes Academy during the 1830s and 40s. The school operated at Clari Montes and was still in existence in December 1844. In promoting his school, Hammond pushed its healthy and retired situation, the extent of the grounds that allowed pupils to exercise and entertain themselves. Fresh fruit and vegetables and dairy produce were in abundance for the pupils to take advantage of. Three teachers were employed, high fees were charged, but the school proved unprofitable.

Thomas was often writing to Sydney newspapers about various causes. In 1835 he was involved in a public stoush with Dr William Kenny over his underpayment for the doctor's services for attending to his family. Kenny's extraordinary advertisement in the Sydney Gazette was meant with equally frank language from Hammond in the following issue. Thomas also regularly wrote to the Government, pushing for the growth and improvement of the town.

We have a physical description of Thomas Hammond provided by local historian J.P. McGuanne in his Centenary of Campbelltown in 1920. "He was tall, this, slimly built; his thinish lips seemed responsive to inward jokes, which he occasionally expressed."

Thomas Hammond lived out his days at Clari Montes (sometimes known as Claremont) where he died in 1876. Despite his convict past, he was described as a "Gentleman" in the burial register. Hammond Place, Campbelltown was named in his honour.

There are not many physical reminders left of Thomas Hammond's days in Campbelltown. The King's Arms on the corner of Cordeaux and Queen Streets has long gone, replaced with today's City Hotel. Clari Montes is also long gone- it's house, orchards and grapevines obliterated by urban development. The property, I believe, was in the vicinity of today's new suburb of Macarthur Heights. Parish maps support this claim. The Thomson family of St Andrews ran a dairy farm on the site in the twentieth century. Even his gravestone appears to have disappeared. Thomas was buried in St Peter's Cemetery. The grave is today unmarked, although a number of sources refer to a marker in the past. He is buried in Section A, Row M, number 2.

HOLMES, Marie 2012
A Scrapbook of History: stories of the Macarthur District

McGuanne, J.P. 1920
A Century of Campbelltown