The Bray family were a much respected family of Campbelltown during most of the nineteenth and early twentieth centuries. They lived at 'Denfield', a house best known for being built by John Farley, the man who claimed to have seen the ghost of Fred Fisher. The Bray's bought 'Denfield' from Farley in 1841. John Bray Senior was highly respected in the community and served the town as a magistrate, as well as a JP, grazier and farmer. His marriage to his first wife Charlotte produced ten children, including Joshua who played a significant role in the development of the Tweed Valley on the Far North Coast of New South Wales. All the children appear to have lead successful and respected lives, except son John- the black sheep of the family. 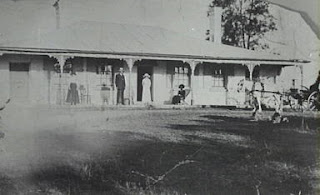 
John Donalus William Bray was born on March 20 1834, the fourth child of John and Charlotte Bray. He moved into 'Denfield' when he was around six or seven years of age. Two events in the life of John reveal the dubious character he became known for. The first event occurred in 1856 when he was aged 22. John had fallen for a local girl named Sarah Keighran, the daughter of another respected pioneer of the district John Keighran. John had given his consent for Bray and his daughter to marry, however for reasons unclear from the newspaper report from the time, he was later 'denied the presence and hand of the young lady'. This denial seems to have been the trigger for John's subsequent outrageous behavior. In the early hours of October 17, John Bray Junior was accused of riding to St John's Catholic Church in Campbelltown and stealing a large crucifix. He also destroyed the altar. It was also discovered that all the seats had been disturbed and unmarked, except that of Catherine's and her family. They 'were covered with the altar cloths, tied in fantastic forms, which connected the accused with the transaction'. 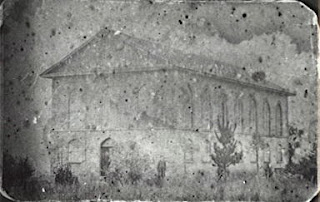 
A few weeks earlier John Junior had been removed from his father's house. Tensions between John and his family had become too much. John then moved in with a H. Rose. He left the area later that morning of the visit to the church. Despite having been seen riding from the direction of the reservoir where the crucifix was found, having his presence unaccounted for by Rose during the time of the "disgraceful occurrence" and a large amount of circumstantial evidence, the case was dismissed as Bray was not actually seen in the church.

John celebrated his good fortune by marrying Sarah the following week. They were married by special license by the Reverend Dunmore Lang on October 23 1856. Their marriage produced only one child named Ada May who sadly died in 1868 aged only 2 years and 9 months.

Later that same year John again found himself in strife with the law. Perhaps the loss of his daughter had affected his mental state. The NSW Police Gazette described how a warrant for the arrest of John William Bray had been issued in relation to a charge of the abduction of an under aged girl named Ellen Maroney. John was described as about 35 years of age, 5 feet 10 or 11, sandy hair, large red beard and whiskers, stylish dress and always wares a black top hat. In July that year John was found in Melbourne and charged with abduction. I was unable to locate anything further relating to this case.

John Bray Senior died at 'Denfield' in 1883. Sarah Bray died at Campbelltown in 1884. It's unclear if she remained with John after the abduction of Ellen. John Donalus William Bray died at the Melbourne suburb of Richmond on January 24 1915.
Posted by Andrew Allen at 17:29