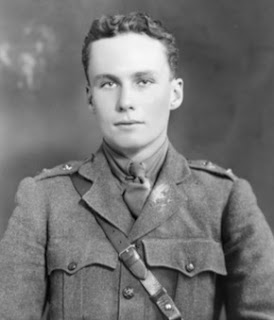 William Lyttle King, known as Bill, was born in the Campbelltown area in 1894. He attended Minto Public School where his father was stationmaster at Minto Railway Station. He later went to Sydney Boy's High School and then to Sydney University where he studied Economics and Business. It was clear from early in life that he would be a high academic achiever. William would go on to achieve honours at university.

It was during his study at the University of Sydney, aged 22, that William enlisted for the First World War and joined the Australian Flying Corp. He trained as a pilot and soon became Lieutenant and trained with the 4th Squadron based in England. He soon became involved in action with his squadron in Northern France. Here at a small place called Savy, and after flying for a month over the battlefield, William's plane crashed. It was not shot down by the enemy but crashed due to aircraft failure. He received multiple injuries including a fractured arm, smashed teeth and multiple contrusions when he crashed 300 feet to the ground. William lay severely injured and for several days lay unconscious in a French hospital. He returned to Australia in early 1918 and spent some time in Sydney's Garrison Hospital, trying to regain the proper use of his right arm.

When the war was over, William completed his studies in law and married his true love Annette Cook. She was the daughter of a recent Australian Prime Minister Sir Joseph Cook.

On the night of April 6, 1925 William was staying with his sister Mrs Ryder in Oxley Street in Campbelltown. He spoke to Sam Bursill across the road and then decided to go for a walk before returning to his sister's house.

William's mutilated body was found next morning on the railway line somewhere between Campbelltown and Leumeah. To some it seemed that it was a mystery as to how it happened. Was it an accident? How could such a person with what seemed such a promising future take his own life. To others though, it was obvious that William was suffering mentally as a result of the war. There are reports that he had recently suffered a nervous breakdown. He was only 31.

William Lyttle King was buried in the Presbyterian Cemetery at Campbelltown. His remains and headstone were removed to another part of the cemetery when the Moore Oxley bypass was constructed in the 1980s. William's life was featured in my cemetery tour of the Presbyterian Cemetery last week. In attendance was his great great niece Mackenzie King who supplied much of the information on him.

A tour of the Methodist Congregational Cemetery at Campbelltown will happen this Thursday, May 12 at 11am. Enquiries and bookings can be made on 46454431. 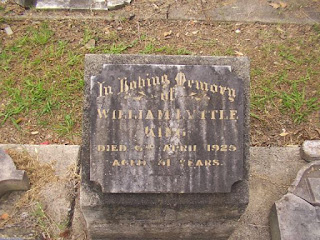