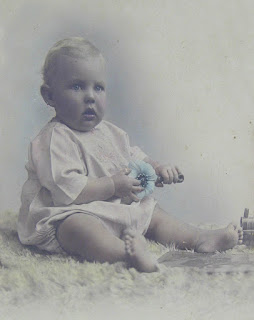 The baby in the photograph above, taken in 1922, is Alan Ernest Ross, the eldest of four children born to Arthur and Beatrice Ross (nee Longhurst). The Ross family lived at "Noreuil" on Waminda Avenue which was, at the time, part of the Soldier's Settlement, featured in our previous History Buff article. The old cottage, now extended, still stands and is located at 151 Waminda Avenue.

Born in 1921 at Nurse Newbury's private hospital at Campbelltown, Alan was a bright and happy boy that everyone loved. He attended the local public school and was in the Boy Scouts. No doubt he would've loved exploring the country surrounding the Ross' six acre block of land on their poultry farm.

Resources at the library claim that Alan developed an illness that baffled the medical profession. He was only 10 years old and spent many weeks receiving treatment at the Royal Prince Alfred Hospital, including blood transfusions from his father. His condition deteriorated and he was brought back home. He passed away at the family home some two weeks later on 25 July, 1932.

I received a visit last week from Alan's great nephew's wife Bronwyn Ross. She explained that Alan died from leukemia. Bronwyn generously donated a copy of the photograph above as well as Alan's brother Philip Harcourt Ross and his wife Beatrice.

Alan Ernest Ross was included in my tour of the Methodist Congregational Cemetery earlier this month. I believed that Alan and his parent's grave were always unmarked, however Bronwyn informed me there was a headstone for all of them, until they were vandalized. The location of the graves are known to the family and it is hoped that one day a marker will again be placed on their graves.