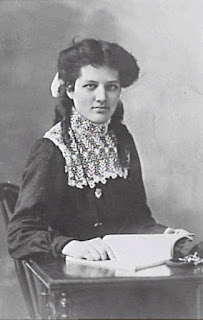 Ruby Etchells photographed while at Teacher's College around 1908

Ruby Etchells was only a young child when her mother Nellie passed away from blood poisoning or septicaemia in 1894. The family lived on a farm near the remote settlement of Eckersley. Nellie was brought to Campbelltown on the back of a cart to get medical attention but died before she could be helped.

This tragedy crushed young Ruby. She and her brother Harry were taken from their farm as children and brought to live in Campbelltown with relatives. For years Ruby pined for her mother. She was often in trouble for being late to school because she would visit the cemetery and sit near where she believed her mum had been buried. She was heard to say "Why did you go, why did you leave me?"

She and Harry had become close after their mother died, obviously sharing and understanding the sadness that both were experiencing. When Harry enlisted in 1914, Ruby felt more alone than ever and was devastated by his death at Ypres in 1917. For more about Harry's death and Ruby's reaction, please read my previous blog post at http://campbelltown-library.blogspot.com.au/search/label/Etchells%20William%20Henry

After the war, Ruby decided to travel to France to visit her brother's grave. On the sea voyage over she met a man named Jack Matthews, who managed a coconut plantation on the Solomon Islands. A romance resulted and they married. After so many years of sadness Ruby's life had turned around. They continued to live in the Solomon Islands before returning to Australia and settling at Wahroonga in Sydney.

Last week I came across the transcription of an interview of Ruby Matthews done in 1976. She had returned to the area for the first time since she left. Her age at the time of the interview would've been about 86.

The scene of the interview was Eckersley and Ruby was trying to find the remains of the old house where she lived as a girl. A garden and fruit trees were all that remained. She goes on to describe how she was four when her mother died. After her death, she lived with her grandmother. When her grandmother died, she lived with an aunt, who lived in a house at 19 Queen Street, where Clinton's Motors was located until recently.

Ruby went teaching at Wangi Wangi, near Lake Macquarie before visiting her brother's grave in France. Her children included one boy named Stanley and three girls.