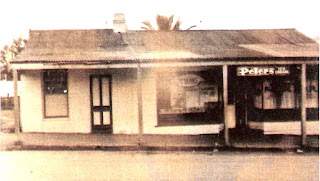 McLean's was the sort of shop that you could find almost anything. Their slogan of 'You Can Get It At McLean's' was generally accurate. Charming little shops such as this are mostly a thing of the past, unable to compete with today's supermarket giants. Let me share with you some of Rod McLean's memories of McLean's Handy Store and Tea Rooms that was located at 11 Railway Street in Campbelltown.

The exact date of construction of the building that later became McLean's shop is not clear. We do know that it was considerably old and constructed of sand stock bricks. There were rumours that the building had operated in the 1800’s in various industries. One was that sly grog was sold from it.

The shop had been operated for some years by the Winton Brothers prior to and during the Second World War. The Winton's were famous for their ice creams and banana splits. They would use large metal scoops to get the ice cream out and so a generous helping always excited the awaiting children! 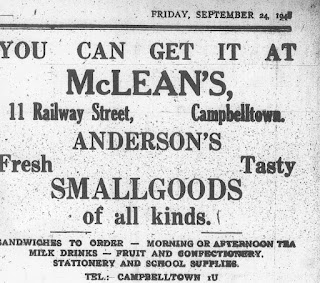 An advertisement from the local newspaper in 1948. Check out the phone number at the bottom of the ad.

In 1946 Alf and Elsie (known as Bobby) McLean purchased the shop. The business prospered by selling seven days a week. It offered morning and afternoon teas, sandwiches, drinks, ice creams and sweets, cigarettes and tobacco as well as catering services for weddings and group gatherings.

The business was a source of employment for a number of local girls. In the early 1950s Alf commenced a fruit and vegetable service to outlying farms around Campbelltown including Appin, Wilton, Menangle and Douglas Park. The service started with a 1928 Chevrolet Table Top and later to a Ford Blitz. This service continued for some years and was later taken over by Alf Billington.

The main building consisted of the main shop, a storeroom on the eastern side and a living room behind the shop with two bedrooms. The rear of the building was later converted into two flats. After the death of one of the residents, due to a motor accident in 1958, son Roderick and his wife Miriam moved in till 1962. 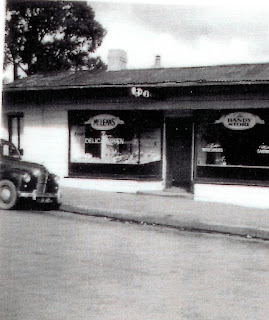 According to Rod McLean one of the characters around town would often come into the shop in an old Army coat asking for some metholated spirits to rub on his arms as the doctor had instructed (with vigorous demonstrations of arm rubbing).
Being opposite the Police Station came in handy at times, especially when known trouble makers were about!  At the start of school terms, boarding students getting off the train and returning to St Gregory’s College made the most of the short time they had to stock up on sweets and biscuits, before boarding the bus to school.
In the 50’s most of the new residents coming to look at land and houses in expanding Campbelltown would stop at the tea rooms for their first “cuppa” in Campbelltown  before venturing into town, or out to Sherwood Hills or Bradbury Avenue.
In 1966 or 67 the property was sold and before too long Council released a plan of the location which encompassed a number of house sites for parking in Railway Street. McLean's was demolished, joining a number of others in Railway Street to succumb to the bulldozer. The shop's address of 11 Railway Street has little relevance today as there are no buildings on that side of the street between Short and Hurley Streets.

My thanks to Rod McLean for providing information and photos of the shop.