Occasionally I read about someone from our town's past that I find fascinating. They mightn't have been a mayor or an alderman, or a prominent business or sportsman, but nevertheless they left their mark on the world. One such person was Jack Campion.

Jack was born next door to where Alpha House once stood, about where Campbelltown Mall's food court is. He was a letter carrier for 48 years and began working in his home town Campbelltown in 1919 where he retired in 1942. He had previously been attached to Haymarket in the city.

The late Eddie McBarron writes briefly about Jack in his book "Campbelltown 1930-1940: Dumaresq Street and Environs" that he co-wrote with Tess Holm, Fred Peers and Archie Walker. It's a book I refer to regularly. I love the way Eddie described him: "tall and very thin, he was a keen dancer. He had a mannerism of walking away when conversing with company only to return again, only to repeat the act again. Rarely bought a newspaper, always borrowed the neighbours'; rarely if ever smiled- a very serious man."

The Campbelltown News gave Jack an impressive write up after he announced his retirement. He was married twice to different women from New Zealand that may have been either sisters or cousins. Jack Campion died in 1948 at Liverpool Hospital. 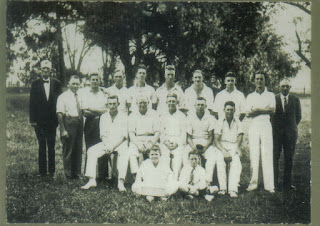 Looking as serious as ever, Jack is photographed standing in the back row on the far left with the suit and bow tie. This was a cricket final and was taken at Camden in 1933. (Campbelltown and Airds Historical Society).