Flowers for a Lady 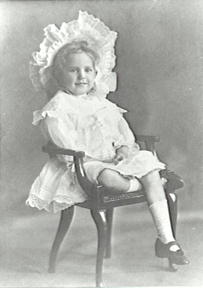 The cute little girl in this photograph is Marjorie Skerritt. It was taken when she was about 3 or 4 years old on a memorable day for Marjorie and for Campbelltown. The date was the 19th of September, 1907 which saw the visit of the Governor of New South Wales Sir Harry Rawson accompanied by his daughter Lady Rawson. The reason for the visit of the pair was to open the Garden Fete and Continental, in the Agricultural Society's Ground, in celebration of the jubilee of the Congregational Church. On arrival at the showground, Lady Rawson was welcomed on behalf of the ladies of the church and was also presented with a boquet of flowers by little Marjorie.

Marjorie's father Samuel Skerritt owned a drapery store on the corner of Lithgow and Queen Street where the ANZ Bank is today. It later became Marlow's and Solomon's stores. They lived at Richmond Villa which still stands in Lithgow Street. Marjorie later married Arthur Chapple and moved to the Lane Cove area where she died in 1982 aged 79.