For eleven weeks of the bleak winter of 1864, George Monk kept a vigil at his son's bedside. Six year old John Nimrod Monk, the second of six children born to George and Emma Monk, was suffering from an unknown illness, a condition that would probably be cured today but deadly in 1864. Young John Nimrod eventually lost his battle on August 24 of that year. Imagine the heartbreak George and Emma experienced and the shock felt by the small village of Campbelltown.

George was a plasterer and painter by trade, so we know he was a skilled craftsman. When his precious son passed away, George put his skills to use by carving his tombstone. The monument is decorated with images of fish and birds. The most striking feature however is the likeness of a young boy. His head sits at the top of the monument located in St Peter's Anglican Cemetery.

Most believe that the young boy is carved in the image of John Nimrod. I'm convinced it is- a father's eternal tribute to the memory of a son taken from him far too soon. 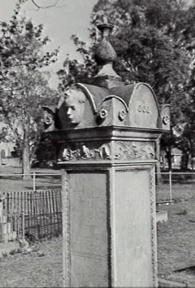