Bert Kitt, known as Nippy or Berty, was born in New Zealand in 1886. He was the son of George and Caroline Kitt who moved from New Zealand to Sydney with Bert and his sister Gertrude in the late 1800s. Not long after, when Bert was about 7 years old, the family moved to Campbelltown in a bullock wagon. In about 1900 when Bert was 14, the family moved to "Caversham" at 26 Oxley Street. This house still stands on the Moore-Oxley Bypass. The house was named after the Dunedin suburb of Caversham that the family lived in. Bert lived in this house for the rest of his long life. 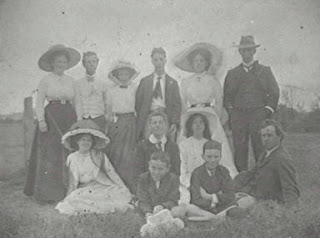 This undated photograph shows the Kitt family outside of Caversham. The people in the photo are unidentified but my guess is that Bert is the young man in the centre in the back row. His father George and mother Caroline would be at the ends of the back row. (Campbelltown and Airds Historical Society)

Bert's father George worked as a bookkeeper for E&A Fieldhouse, storekeeper of Campbelltown. He later became Chief Accountant for Newtown Municipal Council for 25 years until his retirement. Bert followed in his father's footsteps and worked as an accountant for 50 years for Dalgety and Company as well as for Sid Pope's garage in Queen Street where Subway stands today.

Bert also seems to have emulated his father's love of music. George was an organist of a very high standard whilst Bert had a fine tenor voice and was involved in many of the area's musical activities. He was a devout Presbyterian and often sung solos for church functions.

Another love of Bert's appears to be motorcycles. Our library has a number of images lent to us by the Campbelltown and Airds Historical Society of Bert on his machine, often with a friend in his sidecar. There are also photographs taken of Bert on a country trip. Below are some of the better ones we hold. 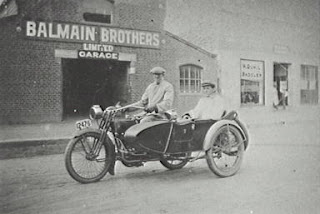 Bert Kitt photographed with an unidentified man in the sidecar. This is likely to be taken at Bega (my home town) as Balmain Brothers ran a garage there early last century. (Campbelltown and Airds Historical Society) 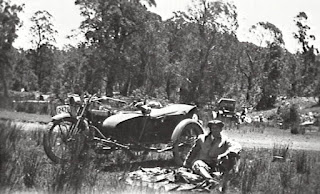 Another love of Bert's was sport. He was an avid golfer, tennis player and bowler. It was through golf that he got his nickname of Nippy. He was known as this from his rapid short golf swings.

As mentioned above, Bert lived out his life as a bachelor in the one house, Caversham. When his parents died at Caversham in the 1940s, Bert lived with his sister Gertrude. 'Bert and Gert' were very close and became much loved identities of the town. When Gert died in 1962 Bert was left on his own in Caversham. He died in his sleep not long before Christmas in 1973 aged 87 and is buried in the same grave as his beloved sister and next to his parents in the Presbyterian Cemetery at Campbelltown. 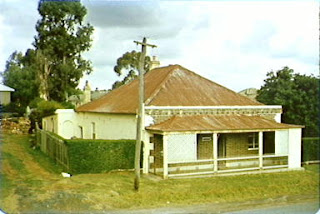 Caversham taken in 1968 when Bert was living alone there. He died here in 1973. (Alex Goodsell Collection).