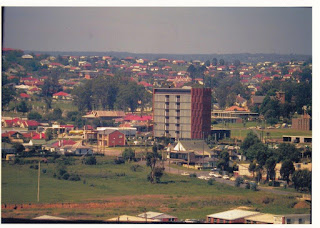 Campbelltown Library recently received a generous donation of photographs by Sue Dredge believed taken by her relative Garnet Dredge. One of these can be seen above. The photo is taken from a building on Blaxland Road looking east towards the multi-level Campbelltown City Council building.

Although the photographs, including this one, are undated, it is sometimes possible to use clues from the photograph to determine an exact or approximate date. There are clues in this photograph that help us. The council building was completed in 1964 and opened in December of that year. So we know the photograph was taken after 1963. In front of the council building in the photo, and on the other side of the railway line, is the Milk Depot.The depot was closed in 1967 and burned down in 1969. Therefore we can now narrow the date of the photo to between 1964 and 1969.

The photograph has a number of other recognisable landmarks. The Ambulance Station can be seen on the corner of Hurley and Broughton Streets. It was opened in 1960 before the council building, so it doesn't help in the dating. What does assist us however, is the building on the extreme right in the middle of the photo. This was part of today's Court House, although it had a significantly different appearance around this time. Dark brick additions along the main level of the facade were constructed which extended to the side of the building. This work was carried out during 1965 and 1966 and the additions removed in 1995. This therefore dates our photograph to after 1964.

If anyone else can identify anything else in the photograph that might help date it to a narrower period, I'd like to hear from you!

A clever reader has noticed that the railway isn't electrified yet. The electrification of the railway was completed and celebrated on May 4, 1968 meaning the photograph pre-dates this. It is mostly likely the photo was taken in 1966 or 1967.
Posted by Andrew Allen at 14:49