Minto has a long history of strange sightings and weird noises that have defied explanation. Many locals believe they all relate to the Minto Monster- a creature that has been terrorising residents since 1932.

In that year farmers were looking for a cow in the moonlight and were shocked to see a 'bellowing' unknown creature which seemed to glide above the ground. Other reports described it as a "dark object gliding through space, 18 inches off the ground." Locals believe this apparition relates to a drowning of a convict that occurred on a dam built by Thomas Rose. This dam was on the corner of Pembroke and Ben Lomond Road. A plaque outlining the origins of the dam and the story of the drowned convict can be found on this corner.

A handwritten letter was unearthed in 1984 from the files of the Campbelltown and Airds Historical Society by historian and former resident Verlie Fowler. It describes the story of what happened that night in 1932. I won't give the full version here as it's too long, but this is part of it:

"It was full moon and my brother Jack, who was staying with us, was standing on the verandah scanning the paddock by the aid of the moon, watching for the return of our family cow which had strayed away early that morning.

Suddenly from the far distance, came the sound of a bellowing cow, and presently down the valley came the vision of an object which Jack at once thought to be the cow returning home.

He stepped off the verandah and walked toward our side fence which was only approx. 100ft. away from the line in which the "cow" was travelling.

As he approached the object, he realised it was neither walking nor running but just gliding through space, approx. 18 inches off the ground.

Unable to distinguish this dark object approaching, he called our small dog and sent him towards the object which, by then, was almost opposite him.

The dog made a rush, and instantly stopped, arched his back and retreated to my brother with his bristles standing straight up and stiff as though terrified."

The letter went on to say how "nothing more was seen of our 'Ghost' for about three years. Then my wife and I witnessed a similar experience to the one Jack had had. It is now over twenty years since this happening and we often wonder if this spirit has found rest." 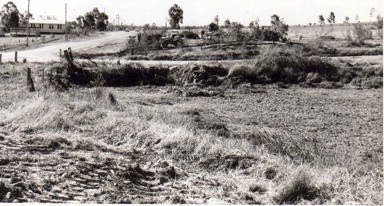 The convict dam site in 1975 at corner of Pembroke Road and Ben Lomond Road, Minto with Minto Public School in left background

The Minto Monster was back in the news again in 1973 when claims that a mysterious creature had been 'terrorising' East Minto residents with its blood curdling screams. The monster's screams, according to one local resident, were like "a woeful cough that goes on and on, like a human being on their death bed". One bounty hunter suggested it was a lost species of extinct Tasmanian Tiger. The Campbelltown-Ingleburn News of the day quoted the hunter about his warnings about approaching the tiger "otherwise someone is going to finish up inside the animal's stomach." A group of residents conducted an armed search of Myrtle Creek but found nothing. (surprise surprise)

As recently as 1987, a Derby Street resident reported seeing a strange creature moving through the trees, making a terrible screeching noise. He described it as having "pointed ears and was a rust colour with three dark brown stripes." The resident told the local paper "If I saw him again, I'd start a discussion with him and entice him to wait for a photographer to come."

No reported sightings have been made since this last one in 1987. The mystery lives on.