'Mumbong' was a cottage that stood on the northern end of Queen Street approximately opposite Chamberlain Street. It was located about where the Shell service station is today. It was sadly demolished like many other wonderful old buildings in the town and therefore robbing us of appreciating its charm.

I don't know when 'Mumbong' was built but it had stood a number of years before the Haydon family lived there from around 1900. Aline Haydon was born at the cottage in 1910. She remembered it was a stone house with 3 bedrooms, a front room, a huge big dining room and a kitchen and bathroom.

Arthur Payten and his family moved in after the Haydons around 1918.

It is not known why the house was called 'Mumbong'. 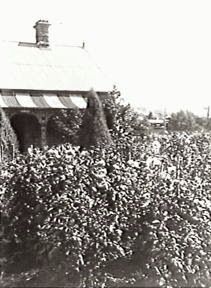