Every morning and afternoon as I drove to and from work I'd pass The Engadine on the corner of Broughton and Lindesay Streets. I loved its charm. Although not very old, its beauty stood out amongst an ever increasing environment of sterility. Unfortunately development was again the priority and The Engadine fell to the bulldozer- another of Campbelltown's treasures disappeared forever.

The Engadine was built in 1924 by Minto grazier Kelvin Cuthell and designed by local architect A.W.M. Mowle. Mr Cuthell came to Campbelltown in 1914 with his mother and lived in Mossberry House. His mother died in 1915. He enlisted in the 6th Light Horse in 1915 and was detached to signals corps in 1918. On arriving home, he lived at Smeaton with the Sedgwick family before marrying Daphne Woodhouse in 1924. They then built and moved into The Engadine. Kelverton Cuthel died in 1930 and after Daphne died in 1945, her sister Iris moved into the house, remaining there until her death in the 1970s.

The Engadine was a dark brick symmetrical house with a terracotta tiled hipped roof, having a projecting bay at each end at the front. The front verandah had ornate balustrading and painted Truscan style columns; the verandah had been partly enclosed. The house had diamond patterned leadlight casement windows and small paned timber and glass door leading from the front verandah. When news of the pending demolition reached the Campbelltown community someone wrote to the local newspaper: "It's got the most magnificent stained-glass windows. I wanted to try to buy it to save it but I didn't have enough money."

The Engadine was included in Campbelltown City Council's Heritage Study 1999 for possible inclusion as a heritage item on the Local Environment Plan, but was rejected. It was demolished in March 2012.

Below is a photograph taken of Mrs Daphne Cuthell with her dogs, "Pat" and "Mike" on the verandah of The Engadine. Below that is a photograph I took of the demolition in March 2012. 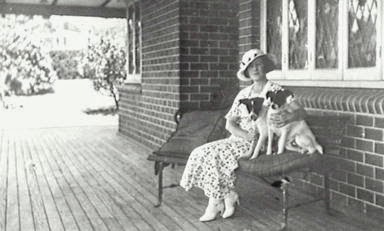