The life of convict John Madden is a fascinating story. Let me briefly describe it to you.


John Madden was born in 1792 in County Galway, Ireland. Records disclose that at the Galway Assizes on 31 March, 1820 he, together with three other prisoners, were indicted for appearing in arms as Ribbonmen, and for administering unlawful oaths. Ribbonmen were a 19th-century popular movement of Catholics in Ireland. They were active against landlords and their agents, and were ideologically and sometimes violently opposed to the Orange Order. The name is derived from a green ribbon worn as a badge in a button-hole by the members.
In Madden's defence, one of the jury is reported to have said, "... that Madden was in his company as a soldier, in the Galway Militia, and that he was a well-conducted man." Yet another, who gave evidence, swore on oath that he knew "... all the prisoners, and never heard anything against them until this business." Nonetheless, Madden and two other prisoners were found guilty and the fourth was acquitted. Madden and another was sentenced to be transported for life.
He arrived as a convict in the colony on the Dorothy on September 19, 1820. John's description in the convict register describe him as 5 feet 4 inches tall, of sallow complexion, having dark to greying hair, hazel coloured eyes and a scar over his left eyebrow. He was a shoemaker and labourer.
John was assigned to Thomas Reddall in 1823 on his Smeaton property and later on his Glen Alpine property. His good behaviour earned him the privilege of a Ticket-of-Leave which, on the recommendation of the Airds Bench, was granted on 22 June 1831.
In 1834 John purchased three-quarters of an acre of land on Menangle Road, part of Paul Huon’s grant. A year later, on 16 November, 1835, John petitioned His Excellency, Major General Sir Richard Bourke, KCB, Governor and Commander in Chief, to be "re-united to the Family from which he was separated at the Time of Transportation". Subsequently, sons Patrick and John embarked on the Elphinstone, a convict ship which left Kingstown Harbour, Dublin on 8 September 1838 bound for New South Wales. Bridget, his wife, sailed from Dublin one week earlier aboard the Margaret but, according to shipping records, daughter, Mary, by this time, had already died. They were all lated re-united with John in Campbelltown. Imagine how exciting this wouldv'e been for them all after so long apart!
John and his wife Bridget lived at Madden's Hill on Menangle Road on land which, today, is in the vicinity of the Sydney Water Supply Channel, north of the Sugarloaf Tunnel, Campbelltown.
John Madden died in 1851 aged 58 years and is buried in St John's Catholic Cemetery. Unfortunately his headstone has recently fallen over. 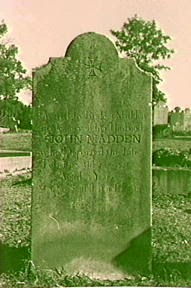