As we are in the middle of the cricket season, I thought I would dig up a local news article that I came across a while ago. In 1926 A Mr Bland Clayton of Minto spoke to a reporter from the Campbelltown News about a cricket match that he remembered in Mawson Park around 1865. He explained that he was the person responsible for introducing round arm bowling to Campbelltown that year. This new method of bowling was met with much resistance from the locals however. He went on to say "the batsmen contributed no small share in disapproving of the new bowling, claiming that the ball was literally thrown at the batsmen and wicket." In this particular match between the locals and a Sydney team, one Sydney player refused to bowl round arm to the batsman John Hurley, a local business identity and ex-convict. He said he would demonstrate the way it should be bowled. This brought a smile to Hurley. His reply was to lift the ball with an almighty swing over Howe Street (this was a street that used to run between the park and St Peters Church) and it crashed through the window of the church. One wonders if the bowler considered giving round arm a try after this! I noticed in an article from the same paper two weeks later there was a petition to have cricket played in Mawson Park again. Alderman Gamble was behind the push. Apparently the wicket had been destroyed in favour of a garden. However Gamble argued that "The reserve in its present state was nothing but a bird's nest, full of swallows and sparrows, it is an eyesore to the town and a disgrace to the Municipality, and the pitch was ruined for nothing but petty spite." Gamble's motion was lost in council and a cricket pitch was never made in the park again. 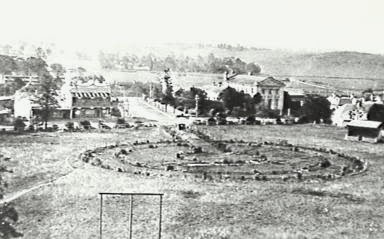