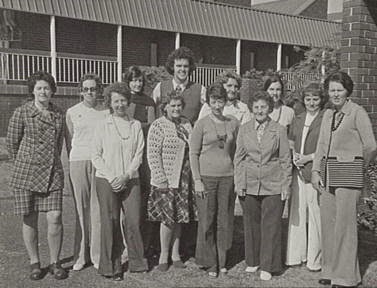 We need your help in identifying the women in this photograph pictured with Michael Knight. The photograph was taken in front of the old Campbelltown City Library in the civic precinct in Campbelltown. The photo is not dated but appears to be taken around the early 1970s.

Michael Knight was the member for Campbelltown in the New South Wales Legislative Assembly between 1981 and 2001. He is probably most known to Australians as the Minister for the Olympics between 1995 and 2001 in the Carr Labor government. In January 2002 Knight was appointed an Officer of the Order of Australia partly for his service to the Campbelltown community.

If you can identify anyone, please click on the comments link or contact the local studies section of Campbelltown Library.
Posted by Andrew Allen at 16:23