It was the main topic of conversation in the street for Campbelltown and in particular Macquarie Fields residents in July 1970. The footprints of a pre-historic animal were discovered, solidified in clay, by men constructing a sewage tunnel near the railway line at Macquarie Fields Railway Station. Dr Anne Howie from the Department of Zoology at Sydney University identified the animal as a labryinthodont, known as Paracyctosaurus Davidi. It measured 3 metres in length and was similar to a crocodile with wide opening jaws which contained very small teeth. The animal had been preserved for 200 million years!

It was believed the animal made the footprints in mud or clay which solidified and eventually filled up with sand and silt. This sand and silt then solidified over the ages. Workmen then removed the earth under the impressions.

Unfortunately the tunnel had to be cemented and once again the footprints disappeared from sight, but not before the university team made recordings for official records. 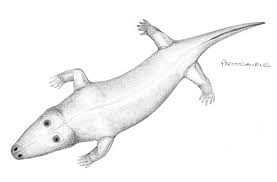