It was an unusually large gathering at the Town Hall in 1922 when the people of Campbelltown gathered to honour local teacher Miss Catherine (Kate) McGuanne after forty years of service.

Many former students were among the audience that night, remembering their first lessons with Miss McGuanne as well as the “smiling welcome each morning as they came to school” Mayor Hannaford proclaimed that his old friend had “all her life carried out the arduous task of training young minds” so that they could “take their place in the world.”

The evening opened with children singing, the Wattle, and followed by a cup of Camamile tea for which an encore was called.

Born in 1855 to Campbelltown shoemaker, Martin McGaunne (owner of 284-286 Queen Street, McGaunne House) Miss McGuanne began teaching at her own private school located near the Fisher’s Ghost restaurant. In 1894 she was appointed to Campbelltown Public School’s infants department, teaching there some thirty years before her retirement. She wore ‘four different frocks, black, bottle green, grey and mauve, each with high boned collars done up to her throat. Always, she wore a bonnet with an ostrich feather and had a jacket fastened with frogs.’

After being presented with a gold wristlet Miss McGuanne responded she would not lecture or preach as she had done in days of long ago when their childhood hours were her special care. She instead, thanked everyone for ‘this lovely, this very lovely watch’ and was reminded not only of the present time but of past hours of satisfaction, gratification and “sometimes minutes of misery.”

She recalled the stage where she stood now being filled with the ‘creditable’ work of her kindergarten class during an agricultural show. And then of taking 40 children to Sydney for School Sports and though the day was ‘perfect, crowded with scenes of entrancing beauty’ at home-time the tram filled fast, and a boy, little Walter Carey became separated from them. Arriving at the station the tram emptied and ‘joy of joys there was Walter eating an apple.’

Earlier in her career, a young man of 19 arrived at the door of her school room.
‘How do you like me in Khaki?’ he asked.
She admitted to liking him very well but didn’t know who he was.
‘I’m Harvey Edmondson. I came from Sydney to say goodbye before I go to the front.’
It was not the last time ‘bronzed and brawny’ lads would seek her out before going off to the Great War but the two she mentioned, Harvey and Willie Rowe are on the honour roll at Campbelltown Public School.

Though many of her ex-students had good memories, John Cheeseman remembers her differently, “Miss McGuanne was a tyrant and I hated her... She would regularly get me carrying her shopping basket after school.’ John would help deliver the groceries to a corner house on the site of Campbelltown Mall today. ‘Her brother was a real sourpuss too! He just grunted.’

Miss McGuanne always set aside time in the morning for a conversation piece where the class would tell her what had happened at home. John reckons she used this time to find out all the gossip of the town.

If John’s recollections’ seem subjective there is another worth mentioning. ‘I was fidgeting with my pencils in the groove of the desk and without warning she brought the cane across my knuckles and broke my finger. It never recovered properly and I shall always have that as a reminder of her.’

I doubt John was at the town hall that night as the musical entertainment resumed - an action song sung by five junior girls ‘dressed as negresses’ but Catherine McGaunne ended her retirement speech, ‘But why linger? The tale is told. My work is finished.’

Miss McGuanne lived out her retirement, ‘in a shady nook of her garden among flowers and books’, dying on the fourth of June, 1946. 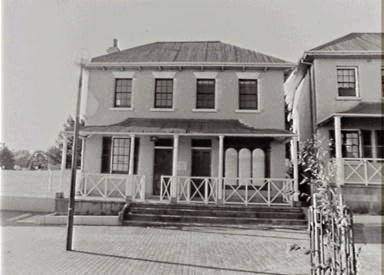 Do you have stories of Miss McGaunne? Perhaps your parents shared an anecdote or two. Please, share them with us!