I was reading about the new movie 'Dawn of the Planet of the Apes' and how a scene of an ape firing a gun has shocked fans. The controversial scene depicts an ape who pretends to befriend two armed humans before stealing one of their guns and shooting them both. This scene reminded me of a similar incident in Campbelltown's history which caused similar horror from a movie audience involving an ape.

During the 1930s the owner of the old Macquarie Cinema often staged bizarre Vaudeville acts as an added attraction. One such act involved a live ape shooting at a piece of fruit suspended on stage. The act went haywire when the ape bit the owner and began pointing the rifle at the audience. After eventually taking a rather wild shot at its target, the bullet was eventually fired harmlessly into a nearby wall. This left a bullet hole which remained until the building's demolition in 1979! I'm assured this is a true story and in fact old timers still recall the remarkable event.

The Macquarie Cinema was on the corner of Queen and Browne Streets in Campbelltown. 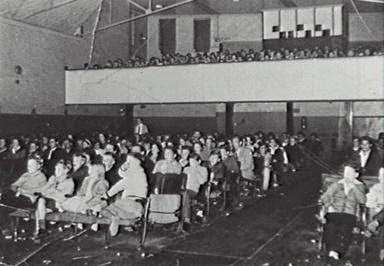