Anyone who lived in Campbelltown in the 1980s would remember 'Wild Waters' located behind Macarthur Square. 'Wild Waters' was an ambitious entertainment park costing $2 million that had an amusement arcade and kiosk, three huge water slides, a double water toboggan aquaskoot and water playgrounds.

Work started on the park in 1982 but was delayed as a change of investors led to a halt in construction. The next year work resumed  and the park was opened with much fanfare on October 22, 1983. Amongst many attractions on the opening day there was a special appearance made by actors Grant Dodwell and Penny Cook from the television show A Country Practice.

The project initially provided employment for 70 local people. A further 2 stages were planned and due to be completed by the 1985-1986 swimming season. The project developers were a company called Jenwell Pty Ltd.

There were hopes that the park would become a major drawcard for the area and attract up to 200,000 visitors each summer.The park had the capacity to handle 1000 visitors a day. It was also to be a place where the youth of the area could spend their time as amusement venues at that time were limited.

The park however never really succeeded. In February 1985 an accident involving a young girl falling over the side was negative publicity. The six year old received seven stitches after falling six metres. There was also a story that people were placing razor blades on the slides using chewing gum. The main factor however was probably to do with the lack of use during the cooler months as the park mainly catered for water activities. Instead of the expected 1000 visitors a day, there was only ever an average of 300 per day and the busiest day in its existence was a crowd of 700.

'Wild Waters' closed on Sunday April 10, 1988. There were plans to relocate it to a block on the Menangle Road but this was axed. The caretaker manager demonstrated his frustration when he said "There is a lot of talk about the lack of facilities in the Campbelltown area but when there are good facilities the kids just don't want to use them. Nowadays kids want entertainment dumped in their laps."

The park was located on the hill above where the service station is now located at the southern entrance to the car park. 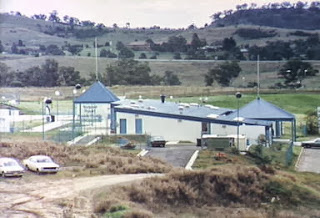 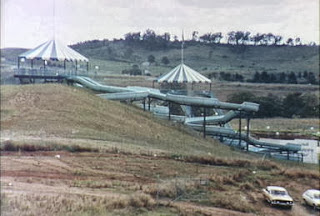