In 1810 Governor Macquarie granted two adjoining 100 acre parcels of land to Matthew and John Kearns. It was on this grant that the property of Epping Forest was established. By the early 1820s the land had passed into the hands of William Kearns who was recorded as having lived there in 1823. The house that was built shortly after (1825) and the property had improved to include orchards, grain crops and general dairy farming. This house still stands today and is known as Epping Forest.

Epping Forest is highly valuable in terms of heritage significance due to its early date and architectual quality. It is a rare example of a Georgian bungalow from the early colonial period, dating from the 1820s and built by Colonel Parker who had served in the East India Company. Its design relects the influence of the Indian bungalow on the houses of this era.

The house is made of sand stock brick. It has a symmetrical facade, semi-circular fanlight above the front door, windows with 15 small panes and solid shutters. The unusual hipped roof verandah is stone flagged, with turned wooden columns and a patterned balance board. There is a detached kitchen at the back of the house.

The property developed into a successful dairy farm and in 1896 a pure bred Ayrshire cattle stud was established by the Clark family. This stud continued until 1960 when it became a mixed herd dairying business.

Today Epping Forest is surrounded by the development of the suburb of Kearns. Attempts were made in 1975 by the Clark family to have the suburb of Kearns named Epping Forest. It was originally suggested that it should be called "Bunbury". 'Epping' means 'people of the lookout place', which possibly refers to an ancient hill fort on a ridge in Epping Forest, England. It was decided by the Geographical Names Board however that this name was too similar to the Sydney suburb of Epping and so the name of Kearns was settled on.

The house is today located in Mississippi Crescent, Kearns.

A sad accident occurred on the property in 1857. A four year old girl named Mary Cullen was struck and killed by a fallen branch from a tree that was being cut down by two farm workers. She was playing with another four year old who was hit by the same branch but not killed. Dr Bell from Campbelltown was called but was unsuccessful in saving Mary's life.

McGill, Jeff et al 1995
Campbelltown's Streets Suburbs: how and why they get their names
Campbelltown: Campbelltown and Airds Historical Society 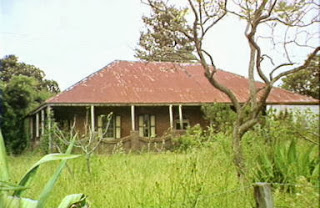 This photograph of Epping Forest homestead was taken in 1993 (Courtesy Campbelltown and Airds Historical Society)
Posted by Andrew Allen at 16:12