Tom Gamble was one of the more interesting personalities from Campbelltown's past. Born in Ireland in 1844, Gamble was a devout Irish Protestant who migrated to Australia and arrived at Campbelltown about 1872. He established himself as a prominent shopkeeper and auctioneer and was elected to Council in 1894. A year later he became mayor. 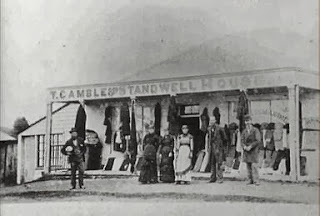 Tom Gamble is standing in front of his shop (second from right) ca 1882.


According to Jeff McGill's research Tom Gamble hated critics. When correspondents in the local newspaper attacked him, Ald Gamble responded by claiming they "warranted a kicking"- and publicly threatened to do just that! He was a radical conservative who believed cut backs were the way to go and that public works should be contracted out and not done by council labourers.

He was very patriotic and pro Empire which was evident in his rousing speeches. When the Boer War broke out he arranged recruitment rallies. He attracted criticism for his arrogance however and lost his seat on council in 1900. Still, he continued his war rallies, became a busy worker for St Peter's Anglican Church and was appointed a magistrate. He also occupied the position of librarian for the Campbelltown School of Arts.

We get some feel however for the softer side of Tom's personality in a letter he wrote to his father in Ireland while he was mayor. In it he writes to his "dada" about how he is anxious to find out about the health of his "mama" and how fond he is of his 20 month old baby. He describes the tough times he is experiencing with his business and the long hours he and his wife work just to make ends meet. He laments that he is getting old and grey and much stouter than he used to be. There is no hint of the hot headed man that he is reputedly known to be.

Thomas Gamble died in 1923. His obituary is glowing so perhaps the town forgave him for his bad tempered ways. His son Roy became mayor the year after he died. 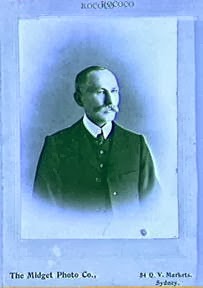 This image was taken in 1895- the year Thomas Gamble became mayor of Campbelltown.