A Tale of Two Ladies.

The first lady of this tale is the Lady Penrhyn, one of the convict transports of the First Fleet. She was a wooden cargo vessel built in 1786, and named for the wife of Lord Penrhyn, Lady Ann Susannah. She was charted by the Navy as a First Fleet vessel, bound for Botany Bay.
She had no sea time prior to her departure, and was fitted out in Deptford for her run. She had on board the largest number of female convicts, as well as a large company of men in charge of the voyage.
The female convicts were delivered to the ship beginning in early January, from Newgate and Southwark jails, and country prisons. The ships of the fleet were assembled at Spithead, Portsmouth in March 1787, and at daybreak on the 13th March 1787 set sail. In Cape Town the Lady Penrhyn took aboard the first horses to come to Australia. One stallion, three mares and three colts were bound for New South Wales. Some difficulties on the voyage were encountered, amongst both convicts and seamen. Lady Penrhyn was also slower than the other ships, but all the ships of the fleet entered Botany Bay Harbour on 20th January 1788.

The second lady of this tale began her life aboard the Lady Penrhyn. Henrietta, born to the convict Jane Langley, arrived on 23rd October 1787, whilst the ship was in Capetown Harbour. The ships surgeon was not present at the birth, although it is likely that one of the three midwives among the convicts was. Poor Henrietta was recorded as male in the surgeon’s log, but she was accurately recorded in the ship’s log. Her baptism took place on board ship on the 4th November 1787, by Rev. Richard Johnson. There is some doubt about her paternity.
Little Henrietta arrived on the shores of Port Jackson 6th February 1788. The first two years in the colony were very hard, with famine taking its toll. Five surviving children and their mothers were sent to Norfolk Island aboard the ship Sirius. At great peril they were landed at Cascade Bay, but the not so lucky Sirius was shipwrecked on the rocks that night. During the five years that Henrietta lived on Norfolk Island, her mother married Thomas Chipp – a marine. The family returned to Sydney Town. Life was tough in those early days and Henrietta referred in her letters as being in “the Orphan School’. The family was also on record as being “on stores” in 1904, the equivalent of social security.
At age 19, Henrietta was married on 23rd March 1807, to the convict Edward Fletcher. On the grounds that she had been an inmate of the Orphan School, Henrietta applied for a land grant and a cow, and was granted 30 acres south of today’s Warwick Farm. Governor Macquarie revoked all land grants made by the Rum Corps after the overthrow of Governor Bligh, but Henrietta re-applied and was re-granted the same land. Thomas Moore wanted this grant, but probably helped Henrietta to receive a grant at Upper Minto (Elderslie), plus an extra 10 acres, which became known as Fletcher’s Farm. Edward worked the farm, as well as being appointed District Constable and Gaoler of Upper Minto, and later Chief Constable of the District of Camden. For this he was granted fifty acres of land, where the Mount Annan Gardens are today. Emma and Edward had six children all of whom were born in either Campbelltown or Cowpastures, or on the farm.
Henrietta’s health had declined over the years, and at the time of her death aged 41 (in 1828), she was blind and crippled. Edward would go on to live to 76 years of age. She was described as “an exceedingly reputable woman who bestowed great pains in bringing up her children”. Although she never lived to see them, she left a legacy of 36 grandchildren. She is buried, with Edward, in St Peter’s cemetery, Campbelltown, and has a First Fleeter’s plaque on her headstone. A remarkable if short life. 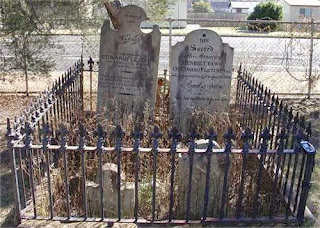 And our other lady, Lady Penrhyn? She was discharged from Government Service and sailed for China, stopping at Norfolk Island, Lord Howe Island, Tahiti, and Canton for a cargo of tea, and finally back to England in mid-August 1789. She had logged 45,000 nautical miles since departing England! She was then purchased in by Wedderburn & Co London and used in regular London – Jamaica runs. She changed ownership several times, and disappeared from records in 1811, after being captured in the West Indies and scuttled. Another remarkable lady!!
Written by Claire Lynch
Sources
Henrietta Fletcher’s Heritage – Marie Holmes
www.firstfleetfellowship.org.au
http://m.hardwickfiles.info/Henrietta_Shewing.html
"A new beginning : the story of three First Fleeters and their descendants" compiled by the Jane Langley Descendants Association.
﻿
Posted by Andrew Allen at 10:02