This Sunday June 17 marks the 186th anniversary of the death of Fred Fisher so I thought it was timely to share the following story with you. When I interviewed local identity Norm Campbell in November 2011 he spoke about the night in 1956 the town came out to witness the re-appearance of the ghost of Frederick Fisher. The ghost was scheduled to appear at midnight on the night of June 17.

Publicity for the event was started by Sydney radio station 2UE and a liquor company that sold spirits (no pun intended) in the weeks leading up to the night. They had promised that "Fred" would make an appearance that night. Estimates of the crowd from the Campbelltown-Ingleburn News were around the 1500 mark- an extraordinary number considering Campbelltown's population. The newspaper counted the cars at 229 at 11.25pm. By the time midnight had come around those that were still there had waited up to 3 hours. There was no entertainment and the night was freezing cold but the crowd waited patiently for midnight.

In his interview Norm relayed that the local police sergeant Whiteley accused him and Jim Vernon, both from the local newspaper, of stirring things up. Norm tried to explain that it was 2UE that originated it all.

Approaching midnight the crowd began to leave the warmth of their cars and began to congregate along the bridge. At midnight of course nothing happened and the crowd slowly drifted away. The newspaper described how "the anti-climax seemed to hit the crowd as a body. People were not backward in saying what they thought. Typical was a woman from Crow's Nest who said it was terribly disappointing after leaving a warm home to wait three hours for nothing." Many had left feeling Campbelltown had let them down.

Within a half an hour only a handful remained. By 12.50 only 2 had remained, determined to be the last in case something appeared. Norm remembers when he left the scene, while walking through long grass, literally stumbling over the local doctor Thomas. He was sitting in the grass with camera just in case the ghost appeared! 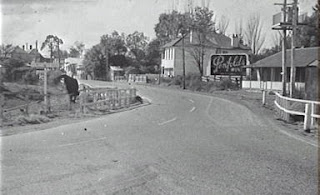 This photograph was taken at Fisher's Ghost Bridge in the 1950s. Note the mannequin on the railing of the bridge. (Ivor G. Thomas Collection, Campbelltown and Airds Historical Society)
Posted by Andrew Allen at 16:08