Campbelltown's second female alderman Mary Brookes gave an insightful interview to The Australian Women's Weekly in 1974. In the article she explained "I am not conscious of myself as a woman on the Council. The men are real nice to me." Then with a twinkle in the eye she added "I rationalise it this way: they can afford to be good sports, they have had it good for so long."


Mary Brookes was born in Chicago on New Year's Day 1904. In the 1920s she worked for the Chicago Flexible Shaft Company (later to become the Sunbeam Corporation). She is credited with naming the newly developed electric mixer "The Mixmaster" in 1930. Mary and her husband moved to Australia when the company sought to grow the manufacturing operations there. They first lived at Elizabeth Bay but it was on a picnic that they first saw St Helens Park homestead at Campbelltown. Mary explained in the interview to the Weekly "I thought if only I could possess that house I would never see a cold day. It had eight fireplaces." Cyril and Mary Brookes were able to buy St Helen's Park in 1949. 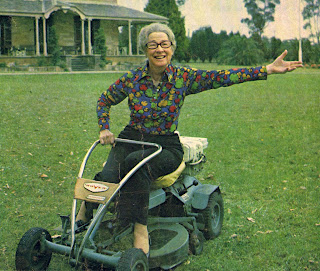 Mary was always kept busy with farming activities at St Helens Park.  She would often be up through the night delivering lambs and later managed the herd of friesians on the property. So fond of her cattle was she, that each one was named; "Teacake", "Buttercup" and even "Faith", "Hope" and "Charity"!

In 1962 she became an alderman on the Campbelltown Municipal Council, a position she held for 12 years. Mary was the second woman ever to be elected to Campbelltown Council. She said in the Woman's Weekly interview "Pushing a trolley in the supermarket I make a point of speaking to everyone I see. It doesn't take a moment to say 'hello honey'. It was undoubtebly this friendliness and hard work that saw her constantly re-elected to council.

Mary "Honey" Brookes died on 13 January, 2001. A park, Mary Brookes Park, in the suburb of St Helens Park is named in her honour.

Do you have any memories of Mary Brookes that you would like to share?
Posted by Andrew Allen at 12:11