The library recently received a donation of photographs of the Jubilee Cross Country Championships of NSW when they came to Campbelltown on July 28, 1950. They were held along the course of Fisher's Ghost Creek. The local newspaper reported that many athletes feared a tough race as the creek was at high level, the water being 18 inches deep. We can assume then that the run included an icy water component that July day!

There were 200 athletes registered in 4 different events depending on age and distance. Famous cyclist Sir Hubert Opperman was there to present trophies on the evening of the event in the town hall. Added to the excitement was that Movietone News covered the race! Prior to the commencement a march of athletes and officials took place, that started from the railway station and proceeded along Queen Street to Fisher's Ghost Creek. 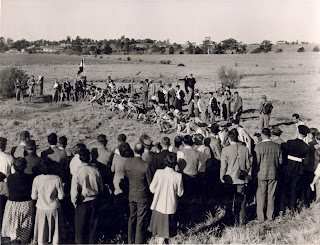 The above photograph shows the runners on the starting line. This was in the vicinity of the area behind Domino's Pizza where Moore-Oxley Bypass extends and Bradbury Oval.