Mayhem at the Crossings

A hazard that faced motorists from the early years of local travel was the dreaded railway crossing. The area had numerous level crossings that needed careful negotiating. I thought I would detail some accidents at two of these: the crossing on Camden Road at Campbelltown and to the north at Morgan's Gate at Leumeah.

Train accidents and incidents along both the Great Southern Railway line and the line joining Campbelltown to Camden have been common over the years. One such drama occurred to an unfortunate group of horses on 7 November 1861- a date remembered in Australian history coincidentally as the first meeting of the Melbourne Cup, won by Archer. Five fine horses were hit by the 3.30am train and killed instantly. The local newspapers did not refrain from using descriptive language to describe the state of the horses. I will spare you the gorey details!

However, it was at the level crossings that most local train accidents did the damage. In 1895 tragedy struck Campbelltown when two year old Cecil Mortimer was killed by a south-bound train at the Camden Road level crossing. Cecil was the son of the gatekeeper, George Mortimer. A number of people witnessed the accident, but were powerless to do anything. Cecil had crossed the line and was making his way back when he was struck.

In 1923, there was a lucky escape for a family named Korniovsky. When getting over the level crossing at Morgan's Gate, the off back wheel of the car caught against the gate post. The front of the car projected over sleepers. At the same moment the Melbourne Express came round the corner. The occupants jumped out as the train struck, but miraculously avoided serious injury or death.

It took a shocking accident in 1925 for authorities to start planning action on Morgan's Gate crossing. Eighteen year old Irene Scattergood was waiting at the crossing for a train when suddenly one dashed past without warning. Irene suffered a fractured skull and died soon after reaching hospital. Her sister Mabel was also struck, but survived the accident. The following year the Railway Commission announced that a plan and estimates had been prepared for an overhead bridge in the vicinity of Morgan's Gates. Work on the bridge commenced in 1928 and was completed the following year. 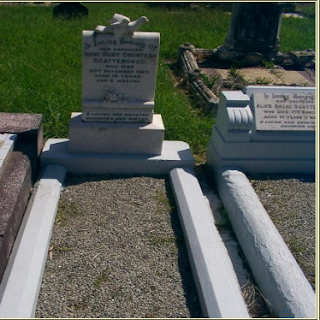 Irene Scattergood's grave in St Peter's Anglican Cemetery
Highlighting the urgency for a solution to the Morgan's Gate problem was another accident in 1927. Despite the frantic signals of gatekeeper Charles Hinton, a car travelling along the southern road swerved at Morgan's Gates just before midnight, crashed through a fence and completely overturned the gatekeeper's hut. The car was driven by a W.H.Tayor with seven passengers inside. The car came to a stop on the railway line, causing all rail traffic to be blocked. Luckily, only one person suffered injuries.

Meanwhile, accidents continued to occur at the Camden Road level crossing. In June 1932 Camden man Herb Scott was killed when a car he was travelling in stalled at the level crossing. Mr Scott and the other occupant attempted to push the car off the line when they were struck by the Picton to Sydney train. He was taken to Camden Hospital but died of his injuries. Another accident at this crossing happened in 1938 when a car crashed into a goods train. A driver mistook the light and realised his mistake before it was too late. There were only slight injuries to the occupants.

The road over the railway on Camden Road was finally closed in 1996 after a replacement overhead bridge was constructed adjacent to the crossing.