The year 1830 will be remembered as one of the most gruesome in Campbelltown's long history. Between 6 February and 31 August, nine people were hanged in the town for various crimes. This is interesting, as I can find no other records of executions outside of this year, apart from John Holmes hanged in 1829 for setting fire to a barn. Other capital punishment crimes outside this period were carried out in other parts of the Sydney area.

The following is a list of people hanged in 1830 in Campbelltown and the crimes they committed:

The usual location for these public hangings in Campbelltown was "The Green" opposite the Court House at what is now Mawson Park. Each of the nine criminals appear to have been buried in the nearby St Peter's Cemetery. Burial records confirm this.

One of the unfortunate people hanged that captured my attention was the aboriginal Broger. He was indicted for the wilful murder of a stockman named John Rivett at Shoalhaven on 6 February 1829. Broger was tried at Campbelltown Assizes on 20 August 1830, found guilty and death ordered for 30 August. His execution had been postponed for a week.

Broger (sometimes written as Brogher), was born about 1800 at Broughton Creek, known today as Berry. His brother's name was Broughton. According to Keith Campbell in the Australian Dictionary of Biography, the brothers responded in different ways to the challenges posed by the increasing numbers of European settlers. Broughton tendered to accept the challenges posed while Broger refused to adapt. One day Broger and another native went to two sawyers, and promised to show them a quantity of cedar trees, but they suddenly attacked the sawyers in the bush, and killed one of them- John Rivett. The other escaped. Broger was eventually captured. When he was brought to the police court he encountered the surgeon, explorer and merchant Alexander Berry. Berry described how 'poor Broger smiled when he saw me. I addressed him and said 'I am sorry to see you here, accused of killing a white man. I did not think you would have killed anyone, I have more than once walked with you alone in the bush when I was unarmed and you were armed with a spear, and might have easily killed me, had you wished'.

Broger, who could speak English, replied, 'I would not have killed you, for you was my master, and was always very good to me'.

Broger's defence was that the sawyers threatened him, and that he killed him in self-defence. However, he was not allowed to speak in his own defence. Meanwhile, the Chief Justice visited him there, when he made a confession, and said that he had eaten the tongue of the sawyer "that he might speak good English".

Broger's execution on a cold Monday at the end of a Campbelltown winter, was witnessed by a party of natives who claimed that Broger had suffered unjustly and that he had killed in self-defence. Given the nature of the time, I believe this is most likely and that an injustice was served. The fact that Broger was unable to defend himself in court was an appalling reflection of injustice at this time.

Various sources give different locations for the murder of John Rivett. These range from Kangaroo Valley, Gerringong and the Shoalhaven River. The location of Broger's End on the upper Kangaroo River is named after Broger.

Broger's brother Broughton became a tracker and constable, dying in about 1850. As his knowledge and skills lost their value, Broughton was gradually forced into the margin of European Society in the Shoalhaven. His devotion to Alexander Berry entitled him to regular rations but also alienated him from his relatives.

Next time I wander through old St Peter's Cemetery I will spare a thought for this proud aboriginal man. Although buried far from home in a white man's cemetery, I am certain his spirit still lingers in the land he loved in the beautiful Kangaroo Valley. 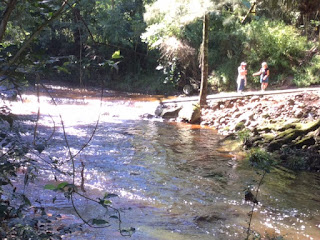