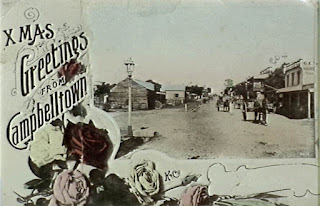 This delightful Christmas postcard from our photograph collection is of Queen Street. It was taken by the Sydney firm of Kerry and Co. The shot is taken from near the intersection of Queen and Dumaresq Streets and is looking south. Pictured in the postcard are Charles Tripp's Wheelwright business on the left behind the lamp post, a hairdresser business opposite and the Old Post Office behind it.

Charles Tripp and his brother Thomas rented this building in 1884. It was later used as a garage after much alteration and served the people of Campbelltown until its demolition in 1966. The hairdresser building continued as a hairdresser for some years after this photo was taken. It operated under the name of Fred Joseph after 1900. It was demolished in 1977. The Old Post Office was built in 1881 and still stands.

Kerry and Co. began operation in 1892, taking over from Kerry and Jones. Given that the name on the hairdresser is different to F. Joseph that took over in 1900, we can assume that the postcard was created between 1892 and 1899.