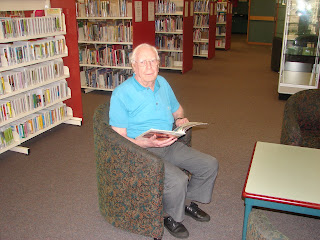 The Campbelltown and Airds Historical Society recently conferred upon Norm Campbell an Honorary life membership to recognize the many years of commitment to our community. Anyone who is interested in the history of Campbelltown would likely know of this kind hearted man with an infectious energy. For those who don’t, we would like to let you know a little about his life.

Norm was born in Lithgow Street Private Hospital in 1923. As a child he lived in Stanwell House, one of the colonial buildings in Queen Street, until the government purchased the strip of Georgian houses and took on the prohibitively expensive task of restoring them.

“Grandfather Chinnocks” was very fond of horses and where there might be family portraits there were photos of thoroughbreds. There were very few cars around then everyone owned a sulky and horse for their transport. There were a number of wild horses in Glenfield if you wanted a horse you would go there, grab one and break it in.

Norm remembers leaving for High School at 7:30am every morning by steam train with his friend Greg Percival, among others.  It was a long day having to change trains, swapping between steam and electric having to be shunted from Granville to Parramatta and getting home after 5:00 pm.

Norm did not see war service, being rejected for medical reasons. He remembers those bleak times on the home front. The young men who came back wounded; the soldiers who did not come back at all. The town itself had rationing and coupons. Campbelltown had a lot of soldiers in those times coming through with troops camped in the showground and the train taking soldiers to and from leave.

After his mother passed away Norm worked as a shopkeeper in the general store which also happened to be the family home.

During his working life Norm had many varied jobs. He gained work as a movie projectionist in various areas around Sydney before Fred Eves, who had given him his start delivering flyers for him, invited him back as projectionist for the fabled Macquarie Cinema. The introduction of television in the 50’s curtailed the cinema’s activities but there was a silver lining.

Norm began doing stints as a news correspondent for ABC radio, reporting on local events. It was usually 6:30am but it had a large following. Later on he would buy a camera and delivered filmed news reports for Channel 2 and 7, even filming sequences for the Mavis Branson show.

During the sixties, Norm was hired by Jim Vernon to be a photographer for the Campbelltown Ingleburn news, Camden news, the Picton Post and Macarthur Advertiser

During that time there was only one scientific detective for a large area and so he and the police mutually agreed that he should take scientific photos for our area. Norm received criticism for doing this type of work but those photos were to prove the truth of many events. An illustration of that was the crash of a light airplane. One of Norm’s photos showed a twenty cent coin lodged in the rudder controls causing the accident.

But not every day in the newspaper business gained praise. When the newspapers started using computers, Norm was interested in the way they worked. He was banned when he “wiped out” an amount of the day’s work.

At the beginning of the 1950’s Norm had also joined the local fire brigade, becoming Captain in 1968 at one of the busiest and wide ranging of districts. He recalls fondly a fire engine, which could pump 250 gallons of water a minute remaining in use at the station from 1929 until 1964, being unsurpassed in quality for many a year after that.

Norm recalls that many strange things have happened in Campbelltown, luckily more good than bad.

“Retiring” in 1988, Norm Campbell has kept an interest in many pursuits and been so generous in providing Campbelltown Library with so many photos and recollections of Campbelltown’s past over the years. We will be forever indebted to him.