It's amazing to think that a steam train called Pansy once puffed its way very close to Narellan Road. How useful would a train along Narellan Road be today! The last ride happened on 1 January 1963. The older generation of locals regularly share fond memories of riding on the Camden "Tram", as it was known. One former driver and fireman connected to the local railways wrote down his memories of  Pansy in a book titled 'Recollections of Pansy (The Camden Train)', published in 2013. Most of Malcolm Pearson's memories of Pansy are fond ones however one particular memory scared the pants off him!

Malcolm recalled the day that Pansy tore down the hill into Campbelltown with such force, he thought his days were over. He explains in his book "As soon as the train had made its way over the crest of Kenny Hill and onto the steep downhill grade, the brakes would be applied before the train was able to gain any significant momentum". He went on further to explain that "it was not difficult to hold the train to a slow speed so long as the brakes were applied soon after reaching the top of the hill, but if the train was allowed to gather too much pace, then it was almost impossible to reduce its speed and for the rest of the descent the train would be virtually out of control." Well, this did happen to him! Surprisingly it was a driver who was familiar with the line that was responsible for Malcolm's hair raising journey.

Malcolm was working that day on the train and explained that a large amount of coal was collected and added to the milk pots and carriage to make it a maximum load. He had intended to settle down in his seat and relax for the ride back to Campbelltown. That's not how it worked out however. The driver, who was in control of the brakes, did not follow the usual practice and apply the brakes soon after reaching the crest of the hill. The train had gathered a great deal of momentum before he first used the break and this had no affect on slowing the train down. Kenny Hill was an extremely steep gradient. So steep in fact, it was regarded as the steepest gradient used by adhesion locomotives in Australia. Not the hill you would want to be going way too fast down! In an effort to regain control of the train's speed, the driver had no option other than to thrust his brake valve handle into the emergency position.

Despite reaching the flatter part of the line at Maryfields Station (where Narellan Road today passes over the Hume Highway) the engine did not slow up. By the time it reached a place called Gus' Mudhole (about where the turn off to the UWS is and on the northern side of Narellan Road), Malcolm became extremely worried. As he described in the book, "it was one of the worst feelings I have ever endured." He was convinced, as the train came to close to Kidd's Hill (about where Blaxland Road intersects with Narellan Road), that the train would be unable to negotiate a right hand bend. By some miracle it did, although there was much jerking and squealing. Eventually, after crossing Bow Bowing Creek and the level crossing, the train incredibly came to a stop. Malcolm's knees were shaking and he could hardly stand. He and his colleagues confronted the driver but he couldn't explain what happened and could only offer an apology.

I was amused about him describing how when two girls got off the train, they turned to him and his colleague to wave and smile, completely oblivious to what had just happened!

This is just one of many interesting and funny stories associated with the 'Camden Tram', known affectionately as Pansy. This same train can be seen today at the Thirlmere Railway Museum. 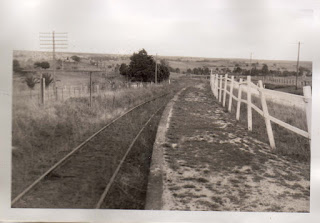