A treasure we hold at the library is the diary of Emma Hume. Emma lived a large part of her life at 'Beulah' on the Appin Road, not far from Campbelltown. The diary (actually a number of diaries), written between 1895 and 1912 describes the trials and tribulations of what it was like living on an isolated country property at the turn of the century.

Emma Johnston Clayton was born on April 25, 1843 at Gunning and was the daughter of Benjamin Clayton and Francis Broughton. She married John Kennedy Hume in 1873 at Campbelltown. They had one child named Ellen. In 1884 Emma, her husband and 10 year old daughter Ellen returned to live at Appin after living at Cooma Cottage at Yass. Emma moved back to 'Beulah'. John Kennedy Hume died there in 1905, Emma in 1919 and Ellen, who never married, in 1936. After Ellen's death, the property and various items including the diaries were given to the RSPCA. They were then passed to a private collection.

Emma's diaries indicate she had a quiet life at 'Beulah'. She records the small daily routines of looking for ferns in the creek, endless ironing, reading in the summerhouse and getting the piano tuned. There were entries almost daily describing her and Ellen walking to the gate and back! She also regularly mentions spending time in the garden, which 'Beulah' became famous for.

I am yet to locate a photograph of Emma Johnston Hume. Further enquiries will hopefully locate one.

The diary is available on microfilm at HJ Daley Library. 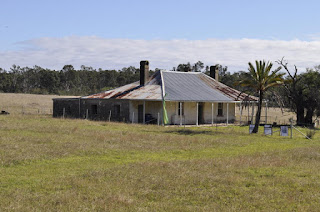 'Beulah' photographed in 2015 by Kevin Rixon (Rixon Collection)
Sources:
HUME MACDOUGALL, Jennifer and GRIEVE, Prudence 1991
Beyond the Borders: An Anecdotal History of the Hume and Related Pioneering Families in Australia
https://www.environment.nsw.gov.au/heritageapp/ViewHeritageItemDetails.aspx?ID=5045426
Posted by Andrew Allen at 16:37