In the library's recent cemetery tours, we looked at the tragic death of William Saunders. William's headstone had been flattened by vandals, so it was decided by some enthusiastic locals to get the stone standing upright once more. Led by local history devotee Learna Coupe and with the approval of St Peters Church, William's headstone was raised in recent weeks. 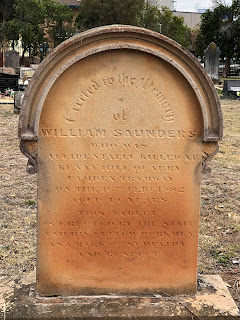 In May 1881, a contract was given for the construction of the tramway line between Camden and Campbelltown, to be completed by January 1882 for a cost of just under 13500 pounds. Generally the line followed the contours of the ground, with one exception- Kenny Hill, where a deep summit cutting was necessary. In August 1881, it was reported that "thousands of tons of stones have been removed" from the Kenny Hill cutting. This part of the construction was responsible for about half of the cost of the line.

The workers lived in a tent village, and among these workers was William Saunders. Young William, aged 18, died in an accident at the "Kenny Hill Quarry" on 16 February 1882. An inquest was held into his death on February 17th, and the cause noted as "death from a blast". William's estate was valued at two pounds. No parents or other family are noted in either his death or burial record, although it was recorded that William was born in Wales, and was a stonemason, hence his work at the quarry. William was buried at St Peters, with a memorial headstone raised by his co-workers. This indicated that William must have been a popular young man. 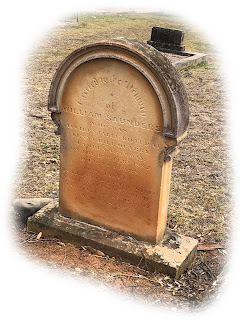