In the 1940s an old liquor law was re-introduced that meant anyone was forbidden to drink at a hotel on a Sunday unless they travelled more than 25 miles. They were regarded as "weary travelers". Occasional raids were made by police to check identity cards which would prove where they lived. As Campbelltown was 32 miles from Sydney it was seen as a prime target for drinkers. This was good news for hoteliers looking for business and thirsty out-of-towners after a weekend drink, however it also proved to be a nightmare for hotel owners at the same time. It was also understandably unpopular with thirsty locals.

The train that the town came to dread was the arrival of the 1.30pm at Campbelltown Station. It became infamous as the "Drunk's Express" or the "Ghost Train" as it was packed with hundreds of loud-mouthed city louts that invaded Campbelltown every weekend. One hotel that attracted these louts was the Royal, located inconveniently or conveniently depending on your situation, next to the railway station. The licensee of the time, a Mr Knap, commented "They're the roughest crowd I have ever seen in my life. They come in hundreds. I slam and lock my doors at 3pm on Saturdays, and they stay locked until 5.15. By then they are nearly all gone again, but in the meantime, they nearly kick my doors in."

In January 1944 a sailor and two female companions travelled on the 'ghost train' for a drink at the Good Intent Hotel. They ended up spending a night in the lock up after they were charged with various offences after a boozy brawl. Newspaper reports describe there being about seventy people inside the pub and several waiting to get in. The magistrate for the hearing said "that shortly there will be a beautiful argument about the question of bona-fide travelers. It is apparent that most of these people come to Campbelltown only to get drink, and I have very grave doubts about most of them being bona-fide travelers." 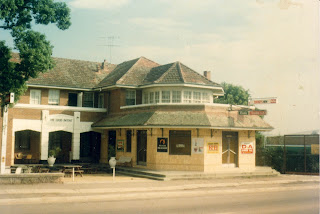