Two of Campbelltown's most historic and treasured buildings both underwent renovations in the 1960s. Campbellfield at Minto and Macquarie Field House both had work done to them. In the case of Macquarie Field House, the renovations saved the house from demolition or falling down. In the case of Campbellfield, the "renovations" almost completely destroyed one of the most valuable examples of colonial architecture and construction, not only in Campbelltown, but the entire country.

Campbellfield at Minto was built on a grant of 800 acres made to Dr William Redfern in 1811. Redfern came to the colony as a convict in 1801 and became a medical practitioner and respected colonist. He retired to his farm at Campbellfield after 1816 and built this house before 1820.

In the mid 1960s crude and disastrous renovations were carried out on the cottage. The first lot of alterations and additions saw a detached kitchen and stables demolished as well as closing in of the rear veranda and the house extended at the northern end. Further renovations virtually destroyed the building, leaving only the stone flagged veranda, a chimney and stone cellar intact. Redfern expert and historian Arthur Jones, who was a teacher at nearby Minto Public at the time, was told by his pupils that Redfern's house had been pulled down. When he went to see what happened at recess, he found that most of the building had been demolished.

Now for the good story. Macquarie Field House in the early 1960s was in a sad state of decay. At one stage it faced likely demolition. In fact it had fallen into such a state of dilapidation that it was almost beyond restoration. A melancholy ruin on a lonely hilltop and mercifully mostly hidden by trees. Enter David Jamieson. He leased the property from the Department of Agriculture and between 1962 and 1963 completely restored the house, entirely at his own expense. It was restored to the requirements of the Government Architect and the National Trust. What a pity Campbellfield didn't have the same requirements. It became Jamieson's home and arrangements were made by the Trust to make periodical inspections. Today this grand old colonial house stands proud on that same hilltop adjacent to the new suburb of Macquarie Links.

An interesting fact about the restoration of Macquarie Field House was that the house's missing fireplace mantles were replaced by marble mantles from "Subiaco", one of the finest colonial homes built in Sydney. It was located at Rydalmere and built between 1833 and 1836 and demolished in 1961.

Below are before and after photographs of Campbellfield and Macquarie Field House after their renovations. 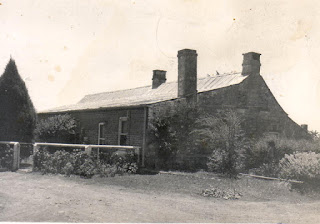 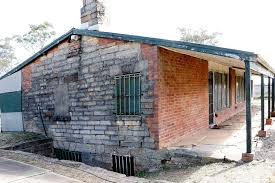 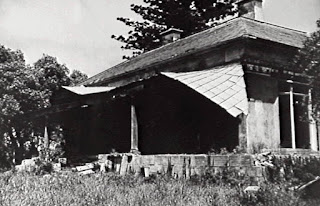 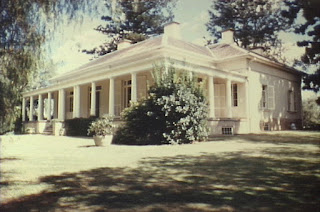 Macquarie Fields House to be saved- newspaper extract from CAHS Dr I. G. Thomas estate.
Posted by Andrew Allen at 17:17