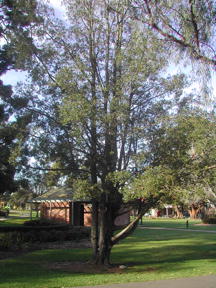 (Grahame Sandry Collection)
The site of Mawson Park is as old as Campbelltown itself. It was here that Governor Macquarie named Campbelltown after his wife Elizabeth’s maiden name Campbell. A plan drawn up by surveyor Robert Hoddle in 1831 showed the area bounded by Cordeaux, Howe Browne and High Streets as a market reserve. High Street later became Queen Street.
In its early days the area was the scene of many brutal punishments handed down to convicts. Five criminals, including bushranger Richard McCann, were hanged on gallows erected on the reserve in February 1830. Near the gallows were the stocks. It was here that an old woman spent four hours in the stocks in the rain for using obscene language. The stocks and gallows were opposite the court house in Queen Street.
The reserve was surrounded by three inns: Forbes Hotel, the King’s Arms (later the Sportsman’s Arms) and the Hope Inn. The latter also faced the court house and was next to the stocks. The first licensee recorded was Isaac Rudd in 1841. The Hope Inn was no doubt named because of its proximity to the court house where life and death decisions were handed out. The large inn burnt down in 1854. We can only guess at what it would’ve looked like as no photos exist.
The Reserve for Public Recreation was approved 23rd March, 1874, and dedicated 4th February, 1876. It would appear that a possible roadway parallel to Browne Street opposite the court house was in existence at some time and divided the Recreation Reserve from the buildings facing Queen and Browne Streets. This was absorbed into the Recreation Reserve by 1874. Howe Street once extended to Cordeaux Street but by 1970 it was merged into the park. 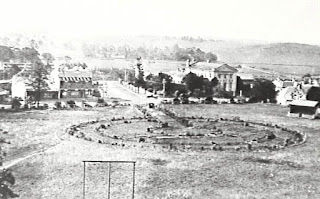 
Cricket and tennis were played on “The Green” and a sporting pavilion was erected. There are some interesting and amusing stories regarding cricket matches over the years. Appin Public School played a cricket match against Campbelltown Public School on "The Green". A white-painted two-rail fence surrounded "The Green" in those days and the grass was long and unkempt. One kid hit the ball and scored half a dozen runs while the other kids searched for the ball in the long grass. It’s hard to believe today. Another story concerned John Hurley, the son of Campbelltown Pioneer of the same name John Hurley, who hit a massive shot into the window of St Peter’s Church! Similarly, local Jack Nash was recorded as smashing a ball from the park so far it reached the train line and landed on a train bound for Sydney!
Besides the Hope Inn, a number of buildings once stood in the reserve. A house called “Myee” was located at the corner of Browne and Queen Street and they were adjacent to three terrace houses which had there frontage to Queen Street. One of these was lived in by the town’s first lamp lighter named Bamford.
"The Green" was named Jubilee Park in 1935, to mark the occasion of the king’s Silver Jubilee. Toilets and watering facilities were installed. In January 1938 the park was officially named Mawson Park in honour of Dr William Mawson, a highly regarded doctor for 28 years in the town and brother to explorer Douglas Mawson. A pergola, shelter shed and entrance were erected at this time with two plaques on the pergola commemorating the event. Another doctor was honoured in 1944 with the establishment of the Dr Jones Memorial Baby Health Centre within the park.
The park was even the scene of a shooting in 1941. A young woman aged 19 named Pearl Medcalf received two bullet wounds after an altercation with a man in one of the shelter kiosks. The first shot blew the top off her finger and the other penetrated her left leg and lodged in her right thigh. She struggled across the park to the police station to report the incident. She was formerly a Rixon from Campbelltown. The man was later arrested.
Numerous pageants have been held in Mawson Park over the years. A carnival in aid of the Coronation Gift Fund was organized in 1954. Another fund-raising event in the 1950s was the ladies’ woodchop! In 1956, the annual Fisher’s Ghost Festival and Miss Spirit contest raised funds to build an ambulance station and a music shelter in Mawson Park. The music shelter was dedicated to the memory of those who served in World War 11. It was replaced in 1991 by a War Memorial. 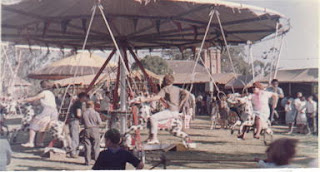 A number of commemorative plaques have been erected in the park. A bird bath and watering place for animals was erected in memory of Patrick (Paddy) Hunt for a lifetime spent caring for the town’s strayed animals. He died in 1978.
In 1977 locals objected vehemently to a proposed change of shape to Mawson Park. This would've been brought about by the extension of Railway Street through to Cordeaux Street. The proposal meant that 940 square metres would've been lost with a sweeping curve connecting both streets. People power won the day and the park remained unaltered.

As far as the botanical beauty of the place is concerned, the park has come a long way since 1926. In that year a report described "The Green" as "a bird's nest full of swallows, an eyesore to the town and a disgrace to the Municipality". This resulted in a program of tree planting, including many evergreens. Most trees planted in the park were associated with commemorative events. Today the park is a haven from the hustle and bustle of the city with its trees, manicured lawns and beautiful flower beds.