As I sit at my desk this afternoon anticipating a much welcome storm brewing from the south, I remember recently reading about a devastating storm that struck Campbelltown a time long ago. The day was the 9th of February 1856 and the Sydney Morning Herald described it as "the most terrific storm opened that has occurred within the memory of the oldest resident".  I'm amused at the language that was used then to describe such events, like the apocalypse had arrived and the earth would be destroyed "...lightning shot down in vivid streams, awfully grand, quivering like blades of fire in deviling streaks; filtering like radiant streamers till lost among the clouds, which looked like giant batteries erected in the heavens; when on a sudden, a flash of lightning with startling thunder, that was sufficient to appal the stoutest heart and shake the strongest nerve, induced each one to conceive his own doom at hand".

A bolt of lightening had struck the road near Fieldhouse's Store. It appeared to bounce off the road and struck the shop with an almighty force. It smashed the doors, windows and shelves into "atoms" as the report described, and set fire to various articles. Inside the shop were the Fieldhouse brothers, a Mr Whiteman and a little girl named Byrne. Edwin Fieldhouse was knocked down senseless and lost his sight for around five minutes. The others were all injured but survived the experience. The Fieldhouse's suffered severe financial losses and it was feared that the shop would be re-built. It wasn't and in fact still stands today at the southern end of Queen Street. 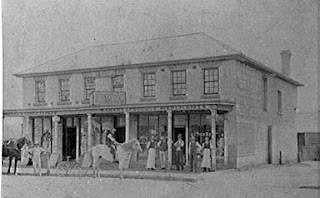 An early but undated photograph of Fieldhouse's Store.